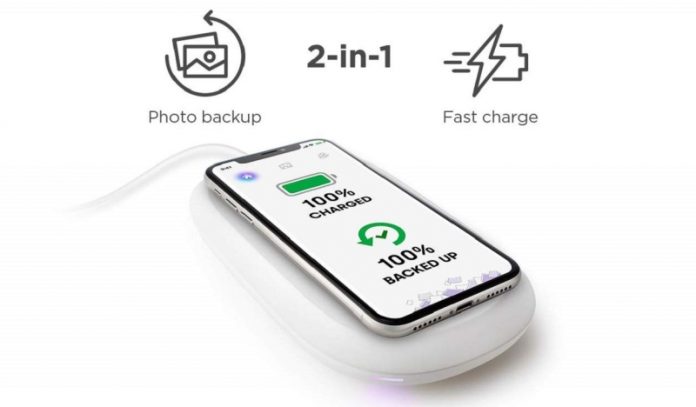 Mobile phones! We all have them and can’t seem to live without them (especially the children). These days they do more than make phone calls and send messages, they are our calendars, diaries, cameras, portable video screens – powerful minicomputers in our pockets (or in some cases permanently attached to our hands). But no matter how low budget or high-end your phone is, they all need charging. Not a problem, your new phone generally comes with a new charger. But a standard phone charger can be slow at charging as most are generally 5w and then with plugging/unplugging the cable, if not careful, you can damage the cable or the charging socket on the phone. So, if you have a newer phone, wireless charging is the way forward.

We both have a Samsung Note 9 and have several fast chargers for them, but we really don’t like having cables everywhere and try to limit them wherever possible, so we were delighted when we received the SanDisk iXpand Wireless Charger to review. Most people know of SanDisk, probably as they may have fitted one of their memory cards into their phone or tablet or used one of their flash drives. So why is a company that is known for storage options for all your tech making a phone charger? Well, this is a special kind of charger and one that we think gives it the edge over other wireless chargers on the market – it is equipped with storage space so that you can backup your phone whilst charging!

It is quite a large charger, white in colour and measuring 201.39mm x 19.51mm x 100.25mm, but our large Note 9 fits on it quite nicely. It comes with a cable length of 6ft (1.8m) on a high-efficiency power plug so that it can easily be placed on a table, desk or bedside drawers without stretching the cable.

Now you would think that would be the extent of the charger. But no, it does have some built-in safety features:

The foreign object detection is something I have never even considered before, it you accidentally place your keys or a coin on the charger the charger will turn off to protect itself.

The overcharging protection and adaptive charging means that it will stop charging when the phone reaches capacity so that the battery is protected, keeping it at optimal performance and extending the life of the battery.

Now just on the charging functions alone, the SanDisk iXpand Wireless Charger is a truly impressive charger. But it doesn’t stop there, it has an app and storage solution that makes backing up the phone really easy and effortless.

I am terrible at backing up my phone. Not long ago we reviewed SanDisk’s Ultra Dual Drive USB Type-C Flash Drive with USB A and C connectors so that it can be plugged into my phone to make backups (with an app) and then can be plugged in to a laptop. This is a great little device, when I remember to use it. The iXpand Wireless Charger takes away the need to remember to do backups.

Once you download the app and set it up (requires connecting to your home/office wi-fi network), when you place your phone on the charger to refill your phone with that all-important energy, it automatically starts to backup your photos, videos and contacts to the built-in storage. No more worrying about losing those precious photos or using up all your mobile data when backing up to the cloud. There is even a micro USB connection on the rear of the charger so that you can connect it to a computer should you want access to whatever files are stored on it.

The app lets you set up multiple user accounts so that if you have more that one person using the charger in the house it can backup each phone to their own user profile. Also through the app, you can free up space on your phone by deleting old photos while still having them saved in the backup. If you remove the phone from the charger while it is doing a backup it will pause it and continue the next time that you place the phone back on it. You can even set it up to keep your phone unlocked when it is on, or in the vicinity of, the charger.

Overall, the SanDisk iXpand Wireless Charger is a perfect one stop solution for charging and backing up your phone. It looks very sleek and charges very fast. The app is very basic with no complicated functions and requires very little user interaction, although I did find that it doesn’t always start the backup.

We are very impressed with the charger, especially as we no longer have to remember to make regular backups. With 128gb/256gb of storage it should be more than enough space for all your photos and even photos from other phones in the household. It is all so simple to use, anybody can use it. It really is a case of placing your phone on the charger and letting it do its job.

This would make a great gift for anyone with a compatible phone who values their photos and is in constantly need of charging their phone. The perfect wireless phone charger for family use as by setting up user profiles all our phones can be backed up very easily and without hassle – we will never lose those precious family photos!