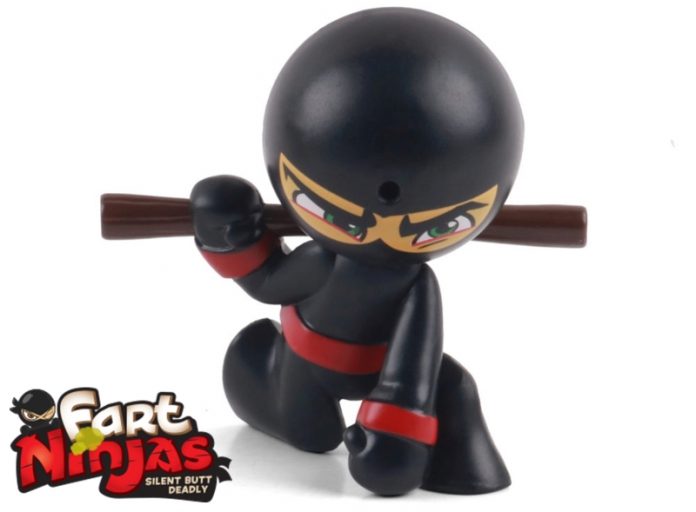 “Trained in the art of espionage, gassassination & skilled in the ancient martial farts techniques!”

Ah, Christmas. A time for family, fun and presents. A time where families sit around the dining table eating Christmas dinner, dinner with plenty of wind inducing vegetables like sprouts. Brussel Sprouts, the vegetable that kids hate and are forced to eat. They hate the taste but seem to love the results they produce, farts – and plenty of them. But there is an easier way for the kids to produce the sound of fart without force-feeding them sprouts (and certainly not as pungent), Fart Ninjas!

Fart Ninjas are motion activated toys that every child will absolutely adore (aren’t they all obsessed with fart and burp noises? The girls in our house definitely are). They can hide their Fart Ninjas around the house and when an unsuspecting person walks past one of the hidden ninjas, the motion sensor will activate, stealthily launching a horrible fart attack, scaring and hopefully embarrassing the unlucky victim, much to the kids amusement.

There are eight Fart Ninja characters in series one, twelve in series two and twelve in series three to collect, each with 10 realistic fart sounds activated by motion sensors. We received “Secret Tailwind” from Series 2 and “Hidden Stench” from series 3. They are suitable for children aged 5 years plus.

For more fun, the free app features a Fart Ninja photo booth, fart mixer to create your own custom fart mixes, plus augmented reality to bring your Fart Ninjas to life.

We received two Fart Ninjas for the kids to enjoy, one from series 2 and one from series 3, much to the couriers delight when he knocked the door with his tooting package that had been farting all the way around his route!

After the smiling courier had dropped off his bottom burping package, it was time for the experts to try them out, the girls aged eight and eleven. The youngest wanted “Secret Tailwind”, leaving the eldest with “Hidden Stench”. These characters are non-posable but all come posed in a different position (they come with batteries installed). Each figure has a motion detector sensor on the head of the character which is quite sensitive.

The kids have absolutely loved hiding these cute little characters in various places, sitting there giggling away waiting for someone to walk past so that the little ninjas release their fart sounds (and are reasonably loud). Kids and their wind noises (they used to get poor old Alexa to “give them a fart” but now they can do it much more stealthily). They are easy to use, just place them where the sensor can pick up any motion and hear them blow. They are rip-roaring fun. With a variety of different sounds, the kids are over the moon with their new toys.

Whilst playability is limited, the kids are really enjoying hiding them around the house waiting for the next victim (especially when they forget that they have hidden them somewhere). Now the house is filled with fart sounds and without a sprout being eaten! At least there are no noxious smells.

The Fart Ninjas are an excellent fun stocking filler or would make a good Secret Santa gift for a fart-loving friend or colleague (we all have one).

Fart Ninjas are a rip-roaring, fart blasting toy, without the associated smells, that will have everybody laughing on Christmas day. You can even download a free app to create your own custom mix of fart sounds or make Fart Ninja selfies.

For more information, visit fartninjas.funrise.com. Available to buy from www.thetoyshop.com or Amazon.