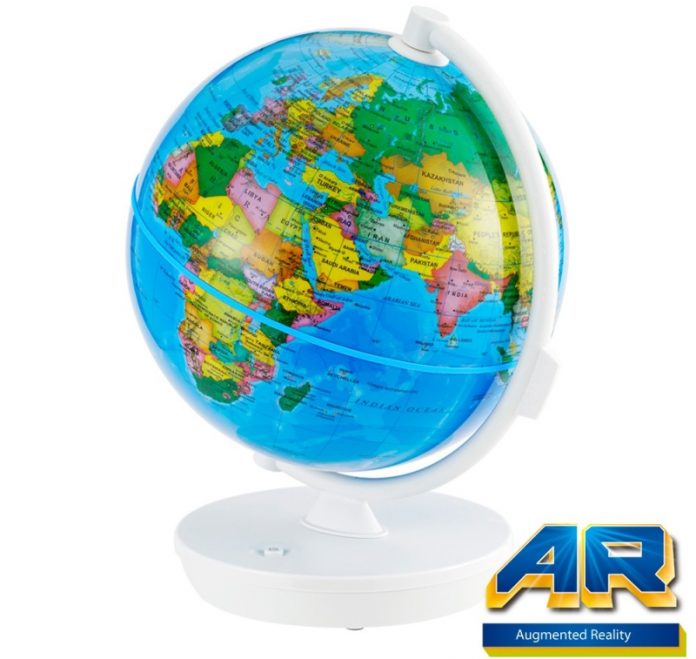 Education is very important, whether that’s for a child or an adult. We spend our whole lives learning new things and the early you can get children to take an interest in new subjects the better it is. When one of the children started to show an interest in other countries and the world we were absolutely delighted when the Oregon Scientific SmartGlobe Myth arrived for review.

So what is the Oregon Scientific SmartGlobe Myth? As you would expect, it is a rotating globe that shows the countries of the world. But with that said, it has a few more features making it much more than a standard globe. It is also STEM approved (Science, Technology, Engineering, and Mathematics).

As well as the Day and Night modes it also has some other great features:

3D Augmented Reality: (a smartphone or tablet is required to use this, the app can be downloaded for free from the Apple Store and Google Play): features extra information such as landscape, animals, landmarks, weather dinosaurs and a quiz.

Earth facts and 12 Constellation myths stories: children can learn more about their world and universe.

The SmartGlobe measures 251x232x307mm, so it is quite large. It is very detailed and finding the country names, capital cities and the constellations in night mode is easy and clear. It also spins quite smoothly and freely on its axis, making it extremely easy for young children to turn it.

Accessing the extra features such as the night light/constellation globe, stories and facts is very easy. The on/off buttons and options/select button are located on the base of the SmartGlobe. If you wanted to hear a story at bedtime, just press the fairy tales button and use the arrow keys to cycle through the stories until you hear the one you want (once playback commences there is also a pause button should it be required). The sound is very clear (although it is in an American accent).

The night light/constellation globe has 3 brightness levels; you press the brightness button 1, 2 or 3 times to cycle to the level of brightness required.

Overall, we found this to be a great fun and very educational learning tool. The kids love it, especially as they are learning where other countries are, and this globe is helping them greatly as well as developing an interest in other countries. While they have no need for a night light, they do like putting it on at bedtime and seeing the constellations. They do also like listening to the facts and occasionally the stories (they prefer to read at bedtime, which is much better than having a story read to them).

The only negative about this globe (although I think it is a very small negative) is the size of the app for the 3D Augmented Reality. The app is very large at 765mb, so it does take up rather a lot of space on your phone or tablet. That said, it does contain lots of information, making the globe much more interactive and more educational as they can learn about things within the country they are looking at.

The SmartGlobe is a fantastic, great quality educational tool that would look great in any child’s bedroom (or even a school classroom) and will help them learn more about the world we live in. In essence it is a globe with an encyclopaedia (when using the augmented reality).

A fun way for children to learn about the world we live in.

It does require 3xAA batteries but can also be powered by USB (adapter not supplied).

DISCLOSURE: We received this product for free for the purposes of writing an honest and impartial review. All thoughts and opinions are our own.