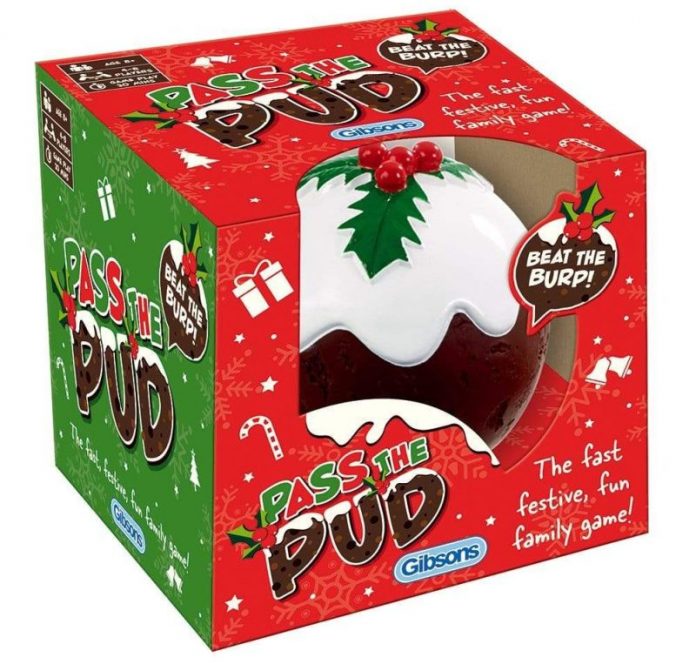 We play lots of board games, that includes tabletop games, in our house and the kids look forward to our game nights (where they then have the usual disagreements over what game to play). With Christmas approaching, we have added a festive themed game to our collection of games – the fast festive, fun family game Pass the Pud from Gibsons Games. A Christmas themed game that the whole family can play and see who can #BeatTheBurp!

Pass the Pud is a fun, action-packed Christmas themed team word game for four or more players aged 8 years plus (if you have heard of the game Pass the Bomb, this is the festive version or if you really want to go old school, think of Pass the Parcel just without unwrapping a gift). And this time there was no disagreement between the kids about what game to play (they were intrigued by the idea of a burping Christmas pudding).

In the box is:

Set up and play is very simple. Before you start you do need to be aware that you need 2x AAA batteries, these are not included so do make sure you have some handy. Once the batteries are in, shuffle all the cards together if playing as individual players or if playing in teams remove the CLUE cards and shuffle the remaining cards together. With the cards shuffled as required, you are ready to play. Simple. Any number of players can play in teams of two or as single players.

There are three ways to play the game; Quick Game, Average Game or Long Game.

Deal the cards to form a pile and put the rest away. The aim of the game is to now win as many sixpences as possible (you win a sixpence by not being the player or team holding the pudding when it lets out its disgusting burp).

The youngest player always starts (always a contentious issue in our house as her older sister rarely gets to start) by selecting a card from the pile. If the card is a THING, WORD or CONNECTION card then the starting player should read the card, start the pudding by pressing the button on the bottom of the pud and giving their answer as quickly as possible. Once they have given their answer, they pass the pud on to the next player or team who does the same. This continues until the pud rudely burps. The player/team holding the pud when it burps is the loser, and the other players/teams receive a sixpence.

If a CLUE card is selected (this will only be in cards for teams and not individual play) each team must decide who will play for them. The player then must describe to their team the word on the card and get them to guess it before the dreaded burp! If guessed correctly, the pudding and card are passed to the next team who must guess the second word on the card etc. etc.

After each burp, a new round begins. The timer on the pudding is variable and can go off any time within 60 seconds.

Overall, we loved this game. It is so easy to play and easily adapted for younger players. The burping Christmas pudding does add an element of fun to the game (and not just for the children). It is also a very good word game to help children use and increase their vocabulary by learning new words and word association. And the jingling Christmas pudding adds a sense of urgency and an adrenaline rush as the pud counts down to its noisy conclusion (and can have the effect of emptying your mind of even the most basic of knowledge).

We felt that the size of the pudding was about right, especially when playing with children as if it was any bigger it would have made it that bit more cumbersome for smaller hands.

Some references on the cards might be difficult for the youngest players to get, especially when dealing with older films and actors. This is where team play comes in or by removing the cards and just playing with the Things and Clues cards to simplify the game for younger players.

You may be tempted to throw the pud from one player to another, please don’t as the pud won’t stand up to that and is designed to be passed hand to hand (throwing the pud can damage the components). It is called PASS the Pud after all, not throw or lob the pud.

Whilst the game is hilarious fun, especially over the Christmas festivities, we did have some very slight niggles.

This is an hilarious game that is easy to play and is very adaptable to different age groups. Whilst it may be Christmas themed, the playability of the game is for all year round as not all the questions are about Christmas.

This will be the perfect fun family game in the run up to Christmas and over the holidays, as well as long beyond. Can you beat the burp?

For more information or to buy, visit gibsonsgames.co.uk.

A Game of Cat & Mouth Review