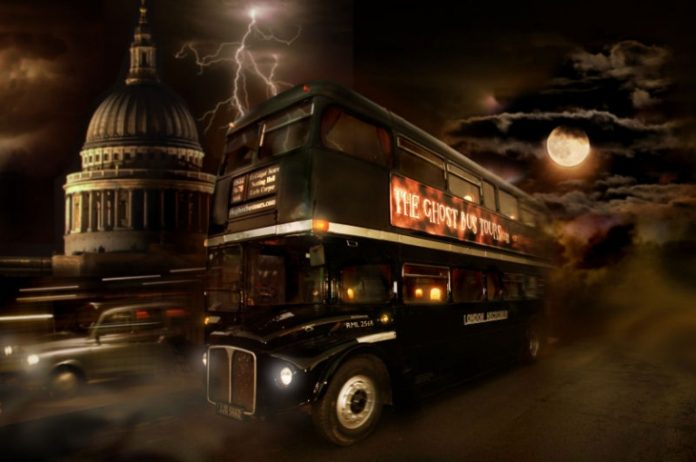 If you are looking for something to do in London in the evening and like comedy and ghosts, then The Ghost Bus Tours are a brilliant and hilarious evening of fun and spooky entertainment. A quirky and fun theatre experience guided sightseeing tour on wheels to discover the gruesome past of London.

The Ghost Bus Tours are a comedy-horror sightseeing tour of London using an old 1960’s Routemaster London bus, which is painted black rather than the iconic red that everyone is used to. On Monday night (12 November 2018) I went, with my girlfriend who had never visited our capital city, on the 9pm tour of London (they also operate in York and Edinburgh).

The bus departs from Northumberland Avenue (in front of the Grand Hotel, just opposite the Sherlock Holmes pub, and just up the road from Trafalgar Square). You can’t miss it, it is after all painted black and has destinations on the front such as Trafalgar Scare, Notting Hell and Earls Corpse.

The inside of the bus in decked out with comfortable seats, table lamps, television screen (front and rear) so you can watch the conductor (tour guide) and cameras. As well as the bus driver there is a bus conductor and a health and safety inspector.

Without giving anything away (I wouldn’t want to spoil your enjoyment and surprise of the tour), the tours takes approximately 75 minutes (may take a bit longer if traffic is heavy) and takes you around Trafalgar Square, St Paul’s Cathedral, Houses of Parliament, Westminster Abbey and other sites big and small hearing spooky tales of death and murder, beheadings and other interesting facts about London’s gruesome past.

The actors interact extremely well with the passengers and onlookers and we even got 3 armed policeman at Downing Street to give us a wave!

The comedy and spooky goings-on have been expertly fused together by some great actors to create a different kind of sightseeing bus tour around London. While you still get to see and hear about some of London’s most famous, and infamous, landmarks as well as some of the more obscure (like Scratching Fanny on Cock Lane – which is real and a quick Google search will confirm!), you will almost be in tears with the antics of the guides (and, as on this tour, one of the passengers).

A hilarious bus tour filled with facts about haunted London and all expertly delivered. If you want a good laugh and see some of London’s sights, then I can highly recommend The Ghost Bus Tours.

For more information or to book tickets visit www.theghostbustours.com or call 0844 5678 666.