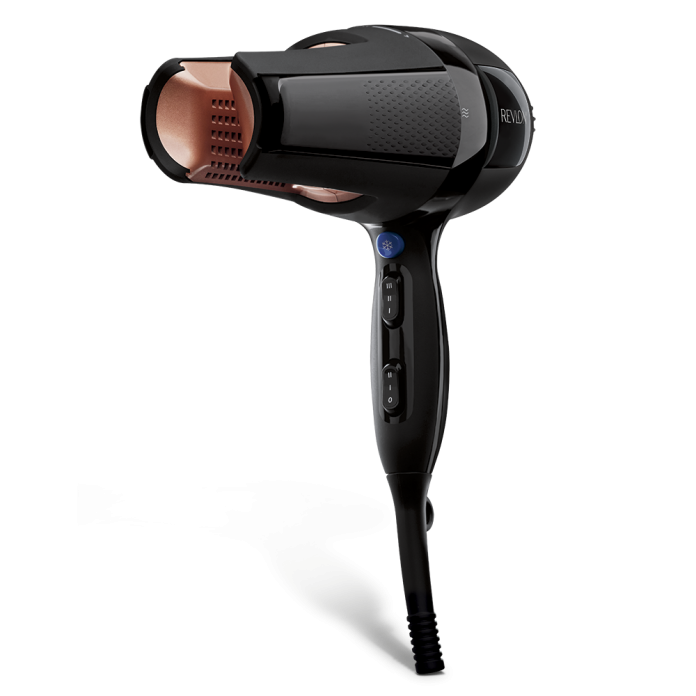 I think it’s fair to say that I had high expectations of the Revlon Salon 360 Surround AC Hairdryer, even before it turned up. The reason for this is that I am still using a Revlon hairdryer that I was bought as a Christmas gift when I was 12. I am now nearly 36, and it is still blowing strong, so if I get a similar amount of use out of this one, it’ll see me up to nearly retirement… eeeek, what a scary thought!

First thing’s first – this is not a cheap hairdryer. With a retail price of £119.99, it is absolutely at the very top end of what I would consider paying for a product like this. That said, it looks so much more high-tech than a standard hairdryer, promising to dry your hair up to 60% faster than a traditional dryer, and with time at a real premium in the morning, any product that can do that has got to be worth a shot!

This hairdryer functions in 2 different ways with its two configurations. The first configuration as a traditional looking dryer, while the second configuration is in the 360 surround mode.

In classic mode, It looks like a standard hairdryer and boasts a powerful 1800w motor, three heat settings, two speeds as well as a cool shot button to lock in style. In this mode, it functions as a fantastic standard hairdryer, and I do think that it dried my hair significantly quicker than my old dryer. It feels great to hold and I thought that the weight was distributed well so my hands didn’t suffer from fatigue after using it. The cord is a great length (described as salon length), which is fantastic as I tend to stand up when drying my hair, so a dryer with a short cord can mean I have to stoop.

In 360 Surround mode it gets interesting! The barrel of the dryer twists – a simple ninety degree twist of the barrel transforms it into something unlike any hairdryer I have seen before – it looks like a cross between a hairdryer and a straightening iron. The idea is that you would place sections of your hair into the gap (the dryer doesn’t touch your hair – it’s a fixed gap that is reasonably wide and the air is then angled so that it is focussed directly on the hair, drying it from the front and the back of the section.

As well as a vastly decreased drying time (I have mid-length hair, but it’s really thick), the thing that I really liked about this was how smooth my hair was after drying. I’m absolutely rubbish at properly blow drying my hair and can never get it to look anything like it looks after leaving the hairdresser. I seem to struggle using both the dryer and brush at the same time, and this product almost completely eliminates the need to do that. I first combed my wet hair into an approximation of the style that I wanted, then started drying.

I simply positioned the sections inside the gap and moved the dryer up and down until that part was dry, then moved on to the next section. My hair normally looks a little frizzy if I have dried it without brushing at the same time, but with no brushing at all, it looked smooth, sleek and shiny – this is apparently all down to the ceramic coating on the inside of the 360 styler and the ionic technology. What a result! Because it dries the hair so much quicker, I would also imagine it will damage the hair less as there is less contact time with the heat. And if you did want perfectly straight hair and needed to use straighteners afterwards, because it’s already so much straighter, this time would also be reduced drastically. I still found I needed to then use it in traditional mode to do the roots, although I think with practice I could even eliminate that!

One of the other real bonuses was when I have been drying my daughter’s hair after swimming. She has bottom-length, seriously thick hair and hates having it dried, especially because apparently I keep burning her head (whoops – bad mummy moment). With this nifty device, the heat is actually kept completely away from her scalp and ears on trained directly on the hair itself, so she is far happier with me drying it. It also means the hair gets much dryer in the 10 minutes I can normally persuade her to sit still than it used to with the old dryer.

I know this isn’t a cheap hairdryer, but it is a fantastic one – maybe one to consider as a gift for the woman who already seems to have everything. I reckon any woman with long hair would be delighted to have this, it’s fast, does a fantastic job and worth the price.

The Gift of Reading with Books2Door Review

The Gift of Reading with Books2Door Review