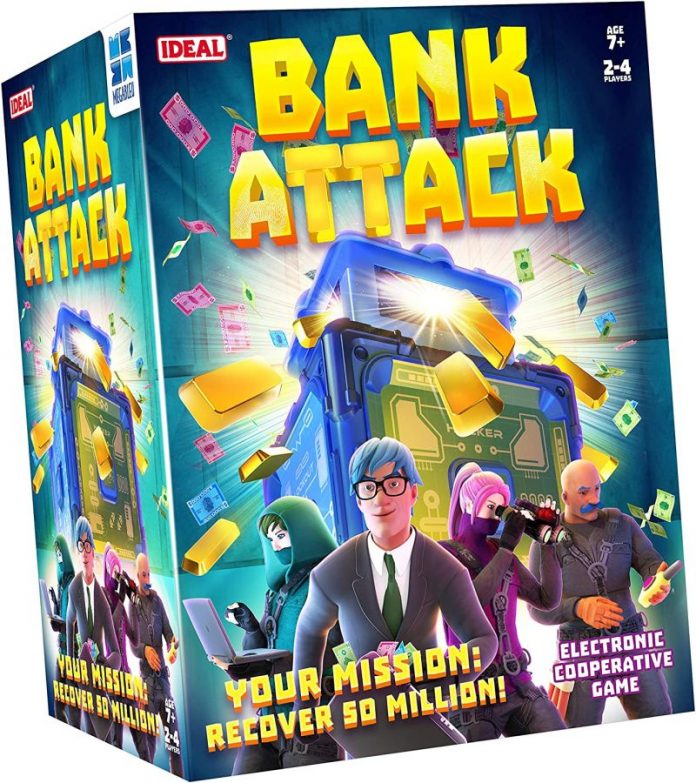 Times are hard with everything going up in price, from petrol to utilities and food to toys. And with Christmas approaching you have to stretch your money even further. Which leads to my question, have you ever thought about robbing a bank? Maybe even getting your spouse or partner and the children in on the act? Well now you can! Unfortunately, it won’t leave you money rich (or see you put in prison), just rich in the knowledge that you have had lots of fun playing with your family and spending some quality time together.

What am I blathering on about I hear you ask? Well, I am talking about a fun family game that we have been sitting around the table playing, and really enjoying. This game is called Bank Attack. A game where we as a family ROBBED A BANK! And what did we get for cracking the vault? A whopping 50 million dollars! What a pity it was just pretend toy money.

Bank Attack is a game for 2-4 players, suitable from age 7 years old upwards. It is an intense, addictive cooperative game, where you work together as a team to crack the vault and release the gold hidden inside! Each person is assigned a role, you then use and swap tools, making sure you press buttons at the right time to open the vault before the alarm goes off! Five levels of play plus one bonus level, each increasing in intensity and challenge.

In the box there is:

To play Bank Attack, you need to set up the vault and this requires batteries, 3x AA batteries to be precise (there are none included). Install the batteries into the battery compartment, pop the 12 gold bars into the top of the vault and lay out the vault-cracking tools out on the table so they are within easy reach of all of the players. This is a game for two, three or four players, and each player is assigned a role – either Hacker, Money Man, Explosives Expert or Lookout. We played with four players and each player needs to sit in front of the relevant face of the vault. Once seated where we needed to be, we were now ready to play. There are five difficulty levels and we started on level 1 as we had never played the game before.

The bank vault is called The Boss. When the game starts The Boss shouts out instructions, all which need to be followed correctly in order to crack the vault and gain access to its treasures as well as collecting bonus cash along the way.

There are four different instruction types that The Boss shouts out:

As the game progresses, these instructions get faster and louder, adding to the panic and sense of urgency. You only have a limited number of lives which are lost when you get an instruction wrong.

When playing as a two player game on the easier levels this is reasonably simple and is manageable for children at the lower end of the 7+ age range. The difficultly really does ramp up as you add more players and move up through the levels. A 4-player game on level 5 is exponentially harder and more frantic than a playing a 2-player game on level one or two. Two players can really challenge themselves by playing with two players and allocating each player two roles. Game play is under five minutes, so there are more instructions crammed into the higher levels coming at a faster pace the higher up the levels go progress.

Overall, we have really enjoyed playing this fast, frantic and fun game. It is a bit something from playing the usual board games and does require concentration skills. When we were able to crack the code and break into the vault, the children loved when the lid of the vault popped up and spewed the gold bars out onto the table, signalling victory and riches. Equally, when you lose all of your lives and fail in your task of becoming expert bank robbers, the alarms will sound and its game over for all of you!

It doesn’t require a lot of time to set up the game and setting the levels depending on the age of the players make it superb for family play. Game play is quick and excitement levels are high. We think that is an excellent fun family game that would make a very good Christmas present this year, or as a game to sit down and play after Christmas dinner has ended.

Bank Attack is a fast, fun and frantic family game where listening skills, memory, concentration, speed and working together are paramount.

DISCLOSURE: All thoughts and opinions are our own. This review uses an affiliate link which we may receive a small commission from if you purchase through the Amazon link.