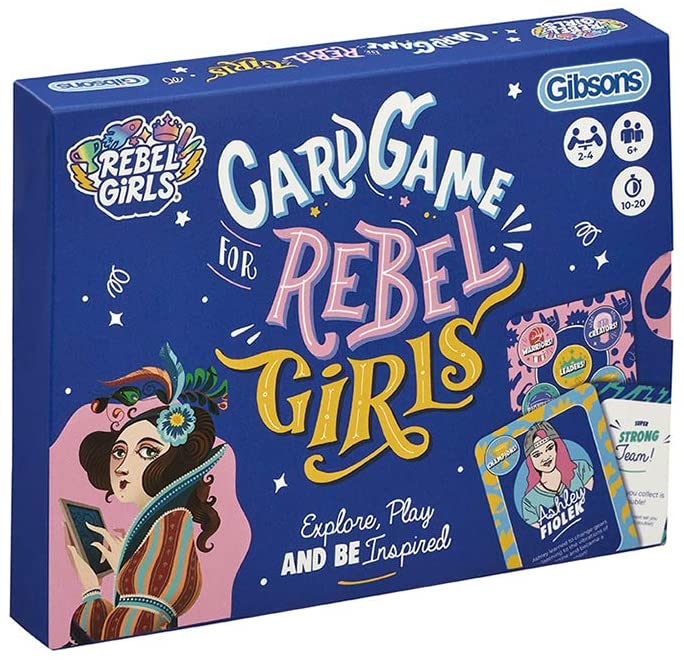 Having just all spent two weeks having to isolate and without leaving the house, and needing to unwind after a day of home-schooling and home-working without spending even more time on screens, we have yet again been turning to good, old-fashioned board and card games. We have a large collection of games in the house, but always really look forward to trying out a new one, so when we were sent Card Game for Rebel Girls, we couldn’t wait to try it out.

With having 11-year-old and an 8-year-old girls, anything that celebrates strong, influential and inspiring women is always welcome in our house; I want the kids to always know that they can be anything they want to be, and that being female need never be a barrier to any path that they might want to follow. The Card Game for Rebel Girls seemed to tick these boxes perfectly, which is a great start for us!

The green cards (70 character cards and the 12 wild cards) form the dealing, playing deck, and the pink cards (26 Rebel Rewards Cards) form the table deck – effectively the playing board. Each of the character cards features an image of a strong woman, a sentence about why they were a Rebel Girl and a category for them: Creator, Warrior, Leader, Pioneer or Champion. The wild cards give you a little ‘power-up’ to help you score more points and the Rebel Reward Cards form the basis of your card collections.

The instructions do make the game sound a bit more complicated than it is, and once you are playing, its actually quite simple and good fun. Basically, each player is dealt three Rebel Reward Cards each which are face-up on the table in front of them. These cards are worth either 2, 4 or 6 points each, and feature between three and five of the Rebel Girl categories on. The green cards are then all dealt out between the players who place them face down next to their pink cards and draw five from the pile to form their hand, and the aim of the game is form as may full sets of pink cards as you can, scoring the most points, before the game ends.

Everyone plays at the same time, and selects one of the cards from their five playing cards and places it on top of a corresponding pink card by matching the category symbols. Then, once everyone has played, an additional card is drawn from the green pile and added back in so you have five cards again, before everyone shouts a code word (we used BANANAS, as suggested in the instructions) and all of the hands are passed to the player on your left, resulting in a brand new hand of cards. Play then repeats with this hand – a card is placed on top of the pink Rebel Reward cards, a fresh one is drawn before shouting BANANAS and the hands move to the left again. If, when you draw a new card, you draw one of the wild cards, this is placed to the side and a re-draw is made until you get a character card. The wild cards can then be used at any point to boost your score, increase your chances of completing a reward card or scuppering the other players. When you complete a Reward Card, it is turned upside down and a fresh Reward card is drawn, ready to be used for collecting. When all of the pink or all of the green cards have been played, the game is over and the points are added up – the player with the most points wins the game.

We all really enjoyed the game, and all of us enjoyed the facts and snippets of information on the cards. The girls enjoyed discussing all of the well-known women, what they did and why they made such a difference. The game itself is great fun, but having it as a basis for the kids to learn about what these women have done is really great.

We did think that the instructions could have been better, and we did come unstuck a couple of times where there were just no hands that could be played for several turns so we improvised and made a new rule that if no hands could be played for 3 turns, two cards could be swapped in from the dealing deck to get play moving again. This worked well, but I think a mention in the instructions for what to do in that situation could have been made.

Having said that, it didn’t detract from the game, which we all really enjoyed. It’s a great game for getting out after dinner and we think it would make a fantastic Christmas present for any girl aged six plus.

For more information or to buy, visit gibsonsgames.co.uk. Also available to buy from Amazon here.