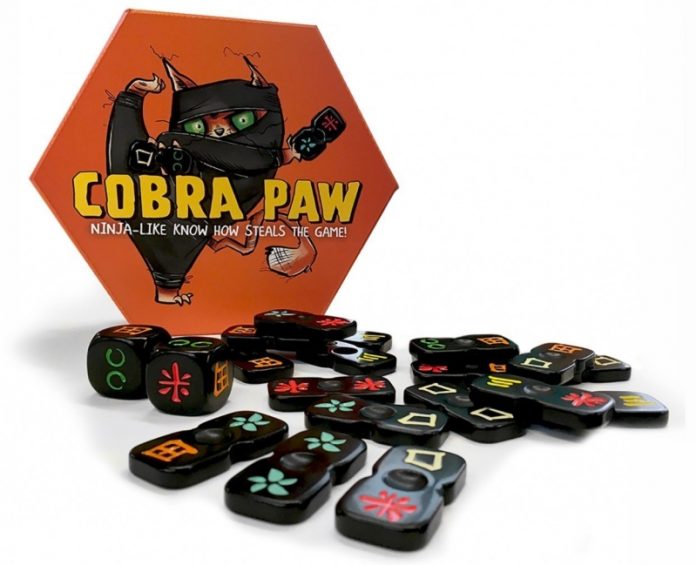 The kids have started getting cabin fever during self-isolation and no school and after not too long the inevitable chants of “we’re bored”, “we have nothing to do” have started echoing around the house despite the fact that we have a large amount of craft, toys and games for them to entertain themselves with!

We love board and tabletop games in our house but some are starting to get a bit “samey” and are always on the look out for something just a little bit different but easy to play with the kids. That’s when Cobra Paw landed on our doorstep. Straight away our first impression was that is looked different and the kids were eager to play it. Just the shape and design of the box was enough to spark everybody’s interest. So far we were off to a great start, before even opening the box!

The game comes in a hexagonal box featuring a ninja cat, Master Meow, depicted on the front. The rest of the box is themed with ninja images and references, including the phrase “Ninja-like know how steals the game!” If that isn’t enough to pique your interest, I don’t know what is.

After being so intrigued by the box, the kids wanted to know what the game was about. If it was an intriguing as the box, we were going to have lots of fun playing it.

Bananagrams Cobra Paw is described as “a tile-snatching game where ninja-like reflexes, sharp recognition skills, and mental fortitude are need to steal the win.” It is a game for 2 – 6 players, aged 6+ and game play is between 5 and 15 minutes.

On opening the box, where the ninja theme continued, we found:

The dice are identical and rather than showing numbers they depict six different style ninja images. The Clawfuku stones (be very careful how you pronounce it around the kids, I’m not sure what the pronunciation is but I would go with claw-fu-ku) are domino style plastic pieces, again depicting ninja images that match the images on the dice. Each stone has a unique combination of two of the images on it.

The instructions are simple to understand and a great read (quite humorous). The adults and kids (age 7 and 9) had the rules grasped in no time. You place all the tiles face up in the centre on the table and roll the dice (youngest player first). Once the dice are thrown, the combination of images will match ONE clawfuku stone, once you spot it, you have to grab it! If you think that is simple, there is a bit of a twist – you can only grab it using your fingers (using the whole paw is considered shameful). If successful, this goes into your winnings pile.  The aim is to collect 6 or 8 tiles depending on the number of players. And to add another dimension, if the images on the dice match a combination of a tile in your winnings pile they are also up for grabs by the other players!

This is a really quick and fun game, we all loved it. Age doesn’t come into it, no questions to answer, just speed of eye and hand is all that it required. The ninja theme makes it engaging for the kids, and even the rule book continues this theme making it interesting.

The pieces themselves are of a very good quality, no flimsy plastic pieces here with the images embossed on to them rather than just printed, so will stand the test of time. If I had to make any changes I would add a drawstring bag so that all the pieces could be contained within it to make it that little bit more portable (although the box isn’t that big, so is hardly a problem).

We have played a few times now and the children have also played it by themselves and do go back to it again and again, so definitely a winner.

Cobra Paw is a fun and engaging family game and very competitive. There is no complicated set up and game play is quick. It makes a great game for staying at home and relieving the boredom of self-isolation.