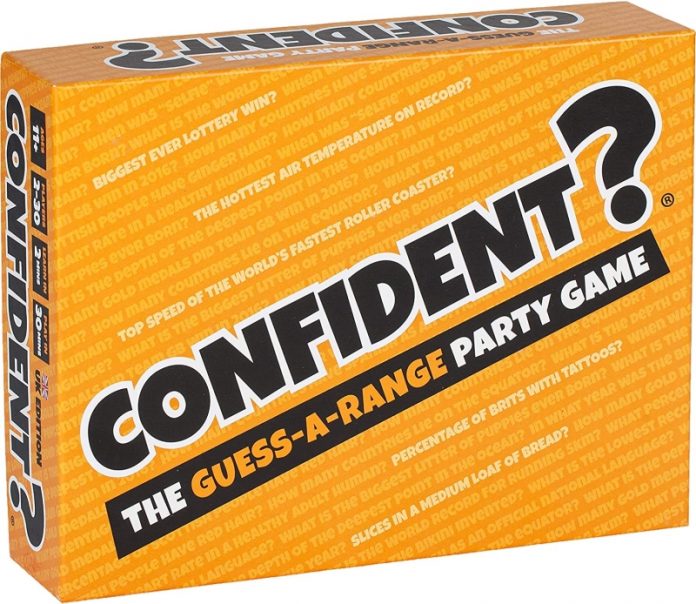 We’re unfortunate enough to be halfway through a 14 day isolation period at home, so having spent all day on their laptops doing their home learning, we’ve been trying to get the kids off their technology on an evening and doing other, less insular activities. Family board games have always been a brilliant way of getting us all to spend time together in a fun way that everyone looks forward to, and now the kids are getting a bit older, it’s been great to turn our family board game evenings into something a little more mentally challenging and little less manic and mad.

Right at the start of our isolation period, we were lucky enough to be sent Confident to try out. Confident is a tabletop game that doesn’t require a board or lengthy set up. It’s as quick as opening the box, handing out the equipment and you’re away! Confident is can either be played as a 2-6 player family game, or up to thirty players if you fancy teaming up for a bigger party game. The box contains:

Rather than testing general knowledge, Confident tests your best guesses to questions such as ‘how many slices in an average loaf of medium sliced loaf of bread?’ or ‘how many countries share a land border with France?’ Rather than just guessing a single answer, you write a range that you think the answer will fall within on your board and once everyone has filled in their board, the answer is revealed. So for example, for the loaf of bread question, you might think there are 14 slices, but depending on how confident you are, you’d narrow or expand the range. If you are pretty confident, you might say there are 13-15 slices, whereas if you are not at all confident, you might go for 10-20 slices. Once the answers are revealed, the scores are awarded – all players whose range includes the answer score a point and the player who has the narrowest range and the correct answer score 3 points. No points are scored for incorrect answers and the first player / team to score 15 points is the winner.

On top of scoring your 1 or 3 points, you also have three ‘Confidence Boosts’ per team too (think Who Wants to be a Millionaire lifelines) to help you on your way to the 15 point winning line. These are COPY – you can just copy the answer of the person who you think is most likely to have the answer correct, SWAP – you get to be a bit of a puppet-master and swap two of your opponent’s cards over, or DOUBLE – for when you’re super confident about your answer so can score 6 points instead of the usual three for having the best answer with the smallest range.

The game is suitable for players aged 11+. We Have an 11-year-old and an 8-year-old in the house, so when we were playing with the kids, we decided to go for the teams option, buddying up a child with an adult. All of us thoroughly enjoyed playing the game, and the fact that it is so quick to both set up and learn was definitely a big plus point for us; learning it took literally two minutes and we were away playing.

The questions are mostly very well pitched, and I would say that most kids over the 11+ recommended age could have a good go at them. In any event, they’d be no worse than lots of the grown ups answers, and everyone at the table had a real laugh that I thought it would be potentially reasonable that the world record for long jump might have been 16 metres!

As well as the cards that are included, expansion packs are available, both in physical format and even as digital downloads. The digital download packs include a Family Pack, making the game more suitable for younger players of 8+ as well as an X-rated adult only pack and a Welsh language option too.

We have all had a great time with this playing together, and I would normally say it’d be a brilliant game to pull out after Christmas dinner if you’ve had the whole family over. Obviously with the year being such a strange one, many of us won’t be doing that this year, but the great thing with this game is we think it would work fantastically well over Zoom or the like. If you’re really organised, you could even post the answer boards out, but even if you don’t do that, you could manage perfectly well with pen and paper, and it’d be a great way of families getting together from a distance this Christmas.

The game is great fun, and provided far more laughs than we ever thought it would! Game play takes longer if you have teams rather than individual players as there is a lot more discussion and negotiation (make that arguing and eye-rolling) than when you play as individuals. With the two adults, we found a round lasted about 10 minutes, playing with the kids took about twenty and I can well imagine playing with more teams, you could easily be playing for around half an hour. That being said, it’s so much fun that it flies, and we lost count of the number of times we said, ‘just one more round?’!

A  really easy 5 star rating – a great game for the whole family that would be even more fun as a party game!