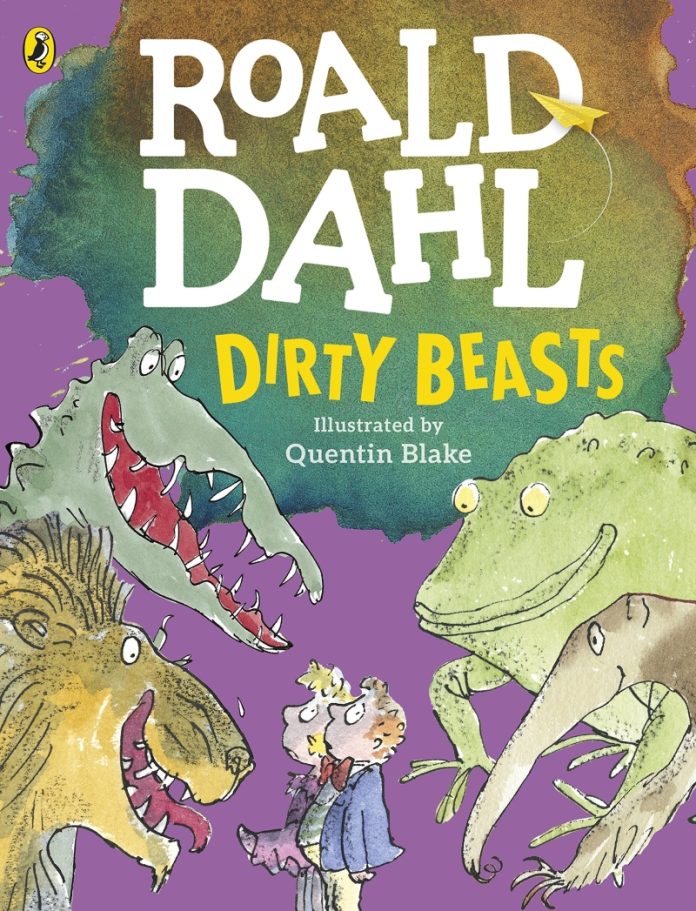 When you think of poetry you probably don’t think of authors such as the master storyteller himself, Roald Dahl. Whilst you probably know his wonderful fantasy children’s stories, filled with dark humour and fantastic tales, and may even have read a few, did you know that he also wrote five humorous poetry books for children that had the same dark humour and wit?

Revolting Rhymes was the first of five poetry books that Dahl wrote for children, published in 1982. In 1983 he published the second book of poetry, Dirty Beasts. Followed by Rhyme Stew in 1989 (this is a more grown up version of Revolting Rhymes and is not suitable for “small people” due to the slightly risqué material and slight sexual references), Songs and Verse in 2005 and Vile Verses, also in 2005. We were really impressed with Revolting Rhymes so was looking forward to Dirty Beasts.

Dirty Beasts is a book of poetry featuring animals, but is not as dark, gruesome or fun as Revolting Rhymes, which is based on classic nursery rhymes. Dirty Beasts, in some ways, is much more child friendly (although some of the child eating rhymes could scare younger children, but I don’t think that they are really any worse than fairy tales like Little Red Riding Hood eating grandma). It is made up poems about nine different filthy beasts over its 72 pages. The filthy beasts are:

All nine rhymes are funny and naughty but not rude or really frightening. The poems feature a pig with a massive brain that has managed to figure out the meaning of his life and decides to take pre-emptive action, a crocodile that eats children, a lion discussing his favourite meat, a scorpion that loves to sting, an anteater that finds a tasty big snack, a porcupine that is not a seat, a cow that flies and ‘pats’ you on the head, a toad and snail that can travels miles in one leap but doesn’t want to be eaten when visiting France and a tummy monster that just wants to be fed.

Overall, Dirty Beasts is a very good book of rhyming poetry featuring a variety of animals that children will just love. It is written with Dahl’s unique style, dark humour and wit that we have all come to love. The poems do vary in length, with some being quite short and others being longer tales.

Dahl is a master storyteller, and his poems are of the same standard. His use of the English language makes these poems very good to read as well as humorous and are told in a way that children will enjoy and easily understand, featuring beasts that eat people, beasts that sting people and even people-pooping dirty beasts. Our favourite rhyme has to The Tummy Master, which is about a child trying to convince his mother that he needs more snacks to feed the monster that lives in his tummy (I do believe we have a 10 year old one of those in our house).

As always, Sir Quentin Blake has expertly illustrated the book and the filthy beasts featured in the book are brought to life in his own unique style.

Dirty Beasts is a good book to introduce kids to poetry using slightly scary and disgusting animals, told using Dahl’s uniquely dark humour. A joy to read, although we did prefer Revolting Rhymes.