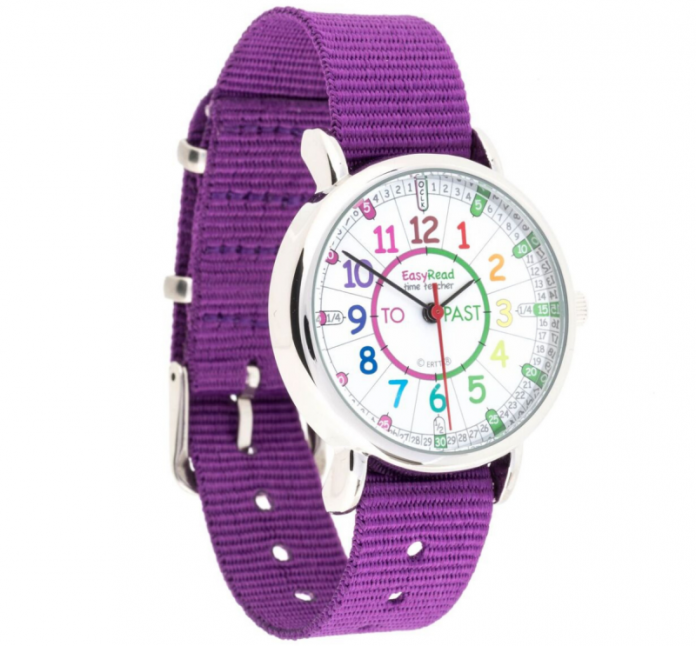 My eldest daughter is ten, and for whatever reason has always struggled with learning two pretty essential tasks – learning to tie her shoelaces and learning to tell the time. I set her the challenge over the summer holidays of cracking at least one of the tasks and we got there with the shoelaces; she’s now tying them neatly and confidently, but we did struggle a bit more with learning to tell the time. We got to the point of o’clock, half past and the quarter hours, but seemed to stall at getting any further than that. So it was a big relief when we were asked to try out the ertt watch with her – a watch specifically designed to help kids learn to tell the time.

The ertt watches are available in two different time telling formats: the ‘old fashioned’ type, which teaches kids to say past the hour or to the hour (so 11.45 would be read as “quarter to twelve”), and a more modern format that would teach them to say “eleven-forty five”. I’m old-fashioned and much prefer past and to, so I chose that option for my daughter.

The ertt is available in a wide range of colours, designed to appeal to both boys and girls. The watch face itself is a lovely clear design, and it is just the strap colour and design that changes. The watch face is a large on, which makes it nice and easy for new time-tellers to see and read. Lots of the watches aimed at children seem to have tiny faces, and just aren’t easy to read, not so with this one. We chose the purple option, which has a bright purple fabric strap and a gorgeous rainbow coloured time-telling face.

The watch comes complete with a guide, to teach the wearer the ertt teaching system. Basically, the watch looks mostly like a standard watch, except the face is divided into two halves: the first half of the dial is colour-coded as green for ‘past the hour’, and the second half is purple and means ‘to the hour’. In addition to the normal twelve numbers on the dial, there is a second run of numbers around the very outer edge of the watch. On the first half, these count from 0-30, then on the second half, they count back the other way back to zero. This means that to tell the time, all the child has to do is read the ‘time sentence’. So in the example below, the child would read the number at the end of the long hand (9), say which side of the face the minutes hand is on (minutes to), then say the number that the little hand is pointing to (2), so they would say “nine minutes to two”.

My daughter got on very well with this method of telling the time – she’s not always the most confident in her own abilities, so having all of the information, plus a method, on her wrist at all times has provided a lot of reassurance that has really helped her a lot. The method has so far proved to be pretty infallible too, and she’s getting to the stage after only a week where she can read the time by sight and glance rather than having to construct the sentence and really think about what the watch says.

It also giving her a decent appreciation for what units of time actually mean, and I think constructing the sentence of ‘twenty minutes to’ is slowly helping her understand what twenty minutes actually feels like, which is clearly an important skill going forward.

The watch is really well constructed and put together, and does feel like a real quality device. The strap can be changed, which is nice and allows the kids to have a different look, or just change it if it gets a little grubby. My daughter said it felt really comfortable to wear and the stainless steel backing and IPS plating make it completely non-allergenic. The watch we were sent retails at £25 and is water resistant, but ertt also make a waterproof version for just £35.

We are delighted with the watch – even though it is aimed at ages 4+, it is not babyish in any way and my 10-year-old is more than happy wearing it. Her little sister also really likes it, so I think I will probably treat her to one in the near future too, probably with a pink strap so they can be a bit different to each other. They are an absolute bargain at the price and are something that I would wholeheartedly recommend to all parents whose kids are either starting to learn to tell the time or who are struggling to grasp the concept.

For more information or to buy visit www.easyreadtimeteacher.com.

Tech Will Save Us Sew & Glow Kit Review