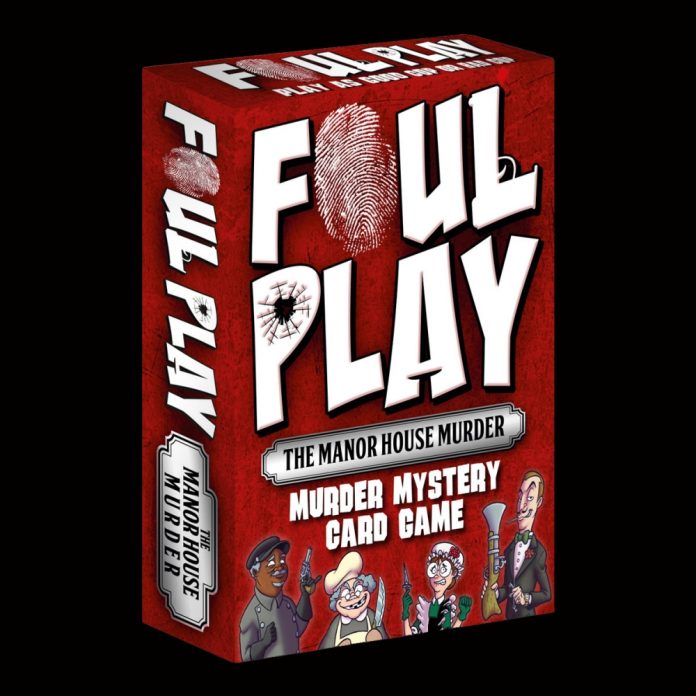 This week, something terrible has entered occurred in our house! There has been a murder in the Manor House, but lucky for us, it is not one for the police to get involved in and it is down to us (two adults and 2 children) to solve it. As you may have already guessed, it is not a real murder, we certainly don’t live in a Manor House and rather than being terrible it has actually been a lot of fun. The “murder” is actually part of a card game that a family can sit around the table to try and solve.

The game is called The Manor House Murder by Foul Play and After Dark Murder Mystery Events. It is a murder mystery game in the form of a pack of 56 playing cards, suitable for 2-5 players aged eight years upwards.

The pack comes with 52 playing cards and 4 instruction cards:

The premise of the game is that the Lord of the Manor has been murdered and the servants are the lead suspects. It is up to the detectives, in this case the players, to solve the crime and prove who has committed the dastardly dead!

There are two ways to play this game, either as Good Cop or as Bad Cop. For those of you who want to play with friends or family that are not in your household bubble, there are even instructions and a video walkthrough on the Foul Play website to play remotely via video call. If you are playing as Good Cop (as we do), the players will need to find the 3 pieces of evidence to work out who the killer is. If you want to go rogue and play as the Bad Cop (who needs solid evidence?), you just need to uncover ANY evidence to have a crack at naming the killer.

There are 4 cards within the pack with the game overview, rules of play, how to set up as good or bad cop and how to win as each cop, with the final card being descriptions of the card actions.

Setting up the game is very simple. The instructions are easy to follow (the rules and ways to play can also be downloaded from the Foul Play website as well as extra resource sheets to help inexperienced detectives). Playing as Good Cop you use 40 of the cards (with only three of the evidence cards in play), as Bad Cop you use all 52 of the cards (with all fifteen of the evidence cards in play).

To play, set the Crime Scene, you place a 3×3 grid (9 cards) in the centre of the table. Deal five cards (Good Cop) or seven cards (Bad Cop) to each player (detective) – this is each player’s ever-changing case file as the investigation progresses. Place any remaining cards face down next to the Crime Scene, this pile becomes the Evidence Locker. Finally, place one card (face down) from the Evidence Locker pile on the opposite side of the Crime Scene, this is the Discard Pile. You are all set and ready to solve the death of the Lord of the Manor. The cards have coloured backs (red, purple, blue and green) and whoever has the most red-backed cards gets to start.

Once the instructions have been read out and mastered, the starting detective takes a card from their hand and places it face up on the table, stating their play, for example if you put down a Crime Scene card you follow the card action for Crime Scene. There are seven types of cards to be played:

We enjoy playing with the Good Cop rules (it is a slightly quicker game than Bad Cop). With Good Cop rules you need to uncover the three evidence cards to solve the crime (you do not need hold the cards in your hand). With Bad Cop rules you need to collect and hold three separate pieces of evidence (one card labelled A, one labelled B and yes, you have guessed it, one labelled C). Once you have collected or uncovered your evidence you can name the killer on your turn – but you must hold the suspect card of who you think is the murderer!

We played this game as a family of four; a nine-year-old, eleven-year-old and two adults. Everybody was clearly able to understand the rules and gameplay and age wasn’t a barrier or disadvantage to any player. We all really enjoyed playing the game, stealing each other’s cards, looking for clues and trying to build a hand of suspects and clues, trying to work out if the killer had a hat, grey hair or not, is a relation to another suspect or not or if the victim was stabbed or shot.

We all had great fun, with lots of plotting, devious card shuffling, and cunning card stealing to try and hinder the investigation of the other detectives whilst trying to build our own case (if all one player’s cards are stolen by others their investigation is over and they are out of the game). The Good Cop case is quicker and is better suited for family games with younger players. The Bad Cop version is definitely better for older teens and adults. We did find that although it can be played as a two-player game it is definitely far more exciting and fun with at least three players but four or five is our recommendation.

With 8 suspects and 15 evidence cards, the game play and outcome is varied with every game. The longevity of the game is excellent and you can quite easily play quite a few hands without being bored or already knowing the killers identity before the game reaches it natural conclusion.

The game is suitable for eight years old and upwards, although the suspect cards do feature comical cartoonish images of the suspects with a knife, sword or gun and some are shown smoking – none of the images are scary.

We think this is a good family card game where logic and puzzle solving skills come into play. It is fun, engaging and excellent for good quality family time. As it is game that comes as a pack of small playing cards, it is also very portable and can be played anywhere.

If you love escape room, puzzle or logic games or even card games, we can recommend Foul Play as it is a great way to spend an evening and have lots of fun doing so.

For more information or to buy, visit www.foulplaygame.co.uk.