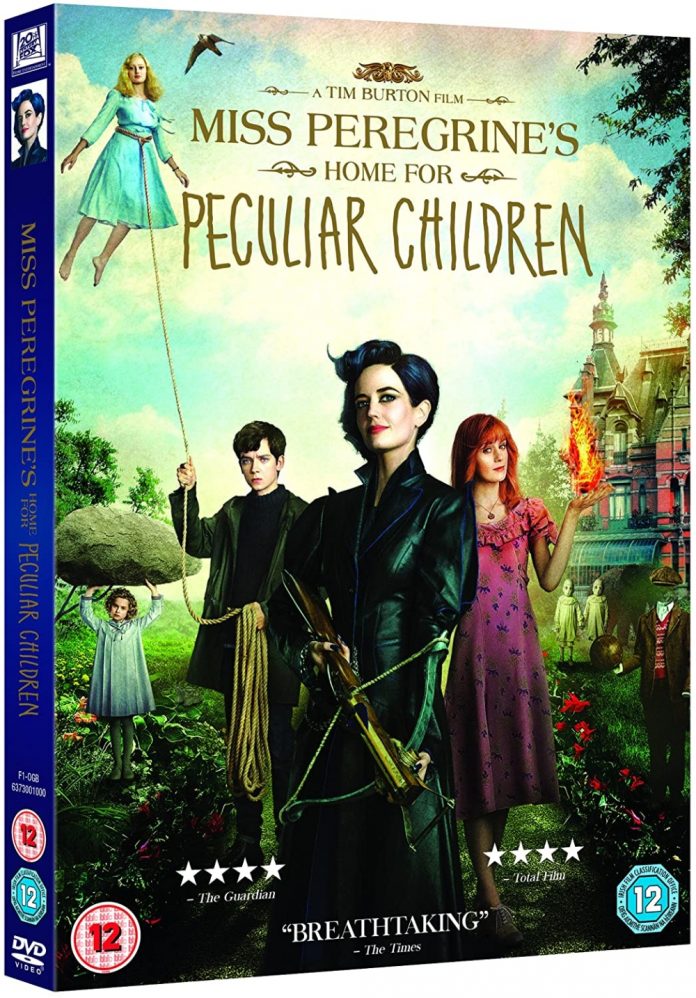 Reading a book or watching a film are excellent ways to relax. Lots of films are taken from popular novels but do films that have been made based on popular books work? I have just finished reading Miss Peregrine’s Home for Peculiar Children, by Ransom Riggs, and really enjoyed it so I was looking forward to watching the film version by Tim Burton. Now after reading the book and watching the film I can say that this is a film that really hasn’t done justice to the book, for me the film version really hasn’t worked, which was a disappointment.

Miss Peregrine’s Home for Peculiar Children, directed by Tim Burton, is a fantasy adventure based on the bestselling book of the same name by Ransom Riggs.

Sixteen-year-old Jacob Portman (Asa Butterfield ) has grown up listening to fantastic tales by his grandfather of a mysterious orphanage off the coast of Wales that was home to some very peculiar children. This orphanage and the children within it are looked after Miss Peregrine. When Jacob’s grandfather is attacked and dies, Jacob is presented with some strange clues and photographs so that he can find the orphanage and discover the story behind this strange establishment and the unusual Miss Peregrine (Eva Green) and her wards. The children within in the home are peculiar because they all have extraordinary and unique powers, and it is Miss Peregrine’s job to protect them from the world, keeping them hidden in a time loop and reliving the same day. When an evil force is intent on destroying them all, Jacob has to team up with the children and save them.

Overall, this is a strange one to review. If you want to see this film, it is probably best not to have read the book first as you will more than likely be disappointed. If you haven’t read the book and start with the film, for the most part you will probably enjoy the film as the images are stunning and visually brilliant, especially the Hollows, although the story can be a bit complex and lacking in detail.

The film version is not a direct book transfer and has lots of changes. I enjoyed 75% of the film, even with the differences between the film and the book, until it went in a very different way than the book did.

As a film in its own right, it is an enjoyable time-travelling action-adventure with some very stunning visuals and special effects (as you would expect from Tim Burton) and a star-studded cast with Terence Stamp, Judi Dench, Samuel L. Jackson, Chris O’Dowd, Rupert Everett and Allison Janney. It is a film that you really shouldn’t try to compare to the book, the premise of the story is there (although I felt lacking in some detail) but is uniquely different.

For younger audiences (12 and above), the story is entertaining with some excellent but odd super-hero type children. Ella Purnell is excellent as Emma Bloom – the levitating girl with heavy lead boots to keep her grounded so she doesn’t float away (in one scene, it is quite amusing watching her love interest Jake pulling her around a rope like he was holding a balloon). Enoch (Finlay MacMillan) is a rather creepy and morbid sole who loves to create reanimated puppet armies using the hearts of dead animals to bring his puppets to life (to fight and kill each other!). Bronwyn (Pixie Davies) has super strength, but my favourite has to be Olive (Lauren McCrostie). A pyrokinetic who creates fire with her hands and has to wear flame-retardant gloves to protect everything and everybody around her (she doesn’t want to accidentally burn everything to the ground). Then there are the rest of the small band of peculiar children; Millard (Cameron King) is the invisible boy who you only know he is there if he speaks or headless clothes are walking around, Fiona (Georgia Pemberton) who can control the growth of plants, Hugh (Milo Parker) is a human beehive and has bees living inside of him (he has to wear a netting mask to eat his dinner so the bees aren’t constantly flying out around the dining table), Horace (Hayden Keeler-Stone) is a prophetic dreamer and can project the future (quite literally project), and then there is Claire (Raffiella Chapman), a sweet-looking blonde girl with a razor sharp-toothed mouth at the back of her head underneath her golden hair.

Samuel L. Jackson is the villain of the piece, a shapeshifter who hunts peculiars. Terence Stamp is Jake’s grandfather, Chris O’Dowd is Jake’s father, Judi Dench is another protector of peculiar children, and Eva Green is just perfect as the vamp Miss Peregrine.

I would describe this as a marmite film, you’ll either love it or hate it – especially if you have read the book and are trying to make comparisons. Whilst the basic story is the same as the book, the execution of the story is vastly different. It lacks detail and rushes towards a conclusion that for me didn’t do the book justice.