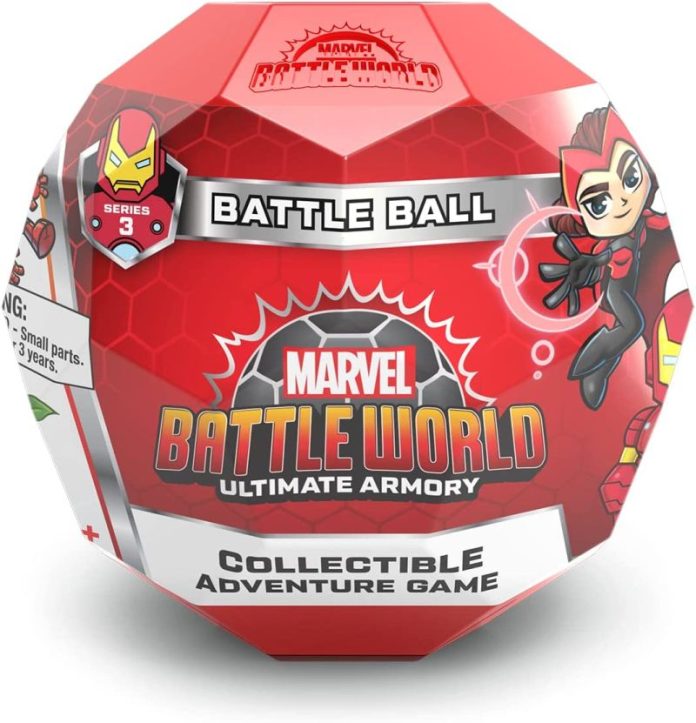 Marvel toys are games are everywhere at the moment and Funko Games have just released the third series of their collectible adventure game, Marvel Battleworld: Ultimate Armory. To be perfectly honest, when we first saw it, we thought it was just another blind bag collectible toy and had no real interest in it. On being sent one for review and getting a closer look, it is so much more, including being a tabletop game for a single player or as a group of players.

What is the Marvel Battleword Battle Ball Series 3? Basically, it is a board game with collectible figures (30 to collect). The Battle Ball is a portable plastic ball that contains collectible figures and comes with a single Hero figure, as well as a Thanostone containing another mystery Hero figure. It also contains cards to play as a board game / tabletop game. The best part is that not only do the kids get collectible figures but they can play the game as a single player, with friends or combine it with other Battle Balls from their own collection or their friends collections and expand the game into a bigger one. There is lots of scope for play.

With out Battle Ball the game starts with one Hero and 5 battles. Once you start collecting other Battle Balls you can combine them to expand play.

To play, your Hero has to win battles. This is achieved by flipping over the cards and going on the attack by moving to different cards using Mind, Energy, Strength or Speed and rolling the die (you need to beat the number on the die with the number on your Battle Card). If your attack is successful, your hero moves along the blue track on the card. If you attack is unsuccessful, you need to place a Danger Token on the orange track. Once a track is completed, you turn it over and place your Hero or Danger token on it to indicate a win or a loss.

Overall, setting up the game is simple enough. We found reading through the rules to play a bit confusing, but Funko Games have provided a handy video to explain how to play and this really helped and helped us understand the printed rules better. Once we were comfortable with how to play we were able to play quite easily.

One Battle Ball is perfect for single player game play but to make the most of it you really and enjoy it fully you do need to be combining other Battle Balls to expand the battles and active Heroes playing.

To be honest, the girls didn’t find the Battle Ball or the game that interesting. Partly because the Marvel characters didn’t excite them and partly because one Battle Ball wasn’t enough to make the most of the game for them. We think that children playing will get the most out of it once they join forces with other heroes and Battle Balls. The Battle Balls have 30 figures and 60 battles to collect and play so there is plenty of expandability.

So, do blind bag collectibles and board games go together? After experiencing the Marvel Battle Ball, we would have to say yes. They feature the collectibles that kids just love, and the expandable portable tabletop game element is a great idea and clearly is better suited for joining up with friends or expanding your own collection of Battle Balls.

This game wasn’t really for us as with one Marvel Battleworld Battle Ball, the interest just didn’t quite seem to take hold. I think if the girls had a ball each to join forces they would have enjoyed it more.

Once we understood the rules of play, it is an easy game to play and we loved that you can pack all the pieces back into the ball and take it with you to play anywhere.

Whilst it wasn’t for us, we do think that it is a collectible game that Marvel fans will love once they start building a collection of Battleworld Battle Balls or have friends with their own Battle Balls that they can all play with together.