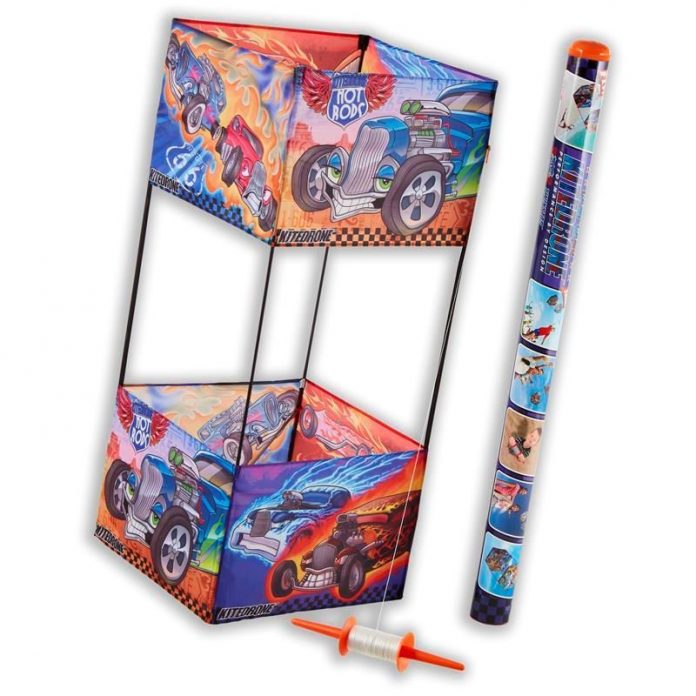 As the weather is getting nicer, this past weekend (Saturday) we decided to go kite flying as we had received a Kitedrone Twinstars Hot Rods box kite from Character Online. The sun was shining (albeit a bit chilly), there was a bit of wind (or so we thought) and we thought it would be an excellent way to get the kids out of the house and enjoying the outdoors.

Before leaving the house we decided to build the kite first, we wrongly assumed that there would be some difficult assembly and didn’t want to try and build it outside in the wind with two excited kids running around.

The Kitedrone comes in its own storage tube (measures approx. 8 x 8 x 116cm), which is perfect for transporting the kite around to protect it from damage (the assembled kite at 42” is too big for the boot of the car anyway, we tried). Inside the tube is the kite (obviously) along with 4 rods, a spool with the string attached and instructions. After a brief look at the instructions if became apparent that the difficult assembly just wasn’t the case.

Assembly of the Kitedrone took less than 5 minutes. 2 of the support bars are inserted into the top box of the kite and at the bottom. Inside each box of the kite are 4 rubber holders that are very flexible, making it easy to insert the rods and making the kite taut. Once the rods are inserted the kite has a lot of strength and holds its shape extremely well. The string spool is then attached by a hook to the kite on to a fabric tag and you are ready to go. It has been designed extremely well and is very simple to assemble. We then disassembled it in the same way in minutes and slid the whole thing very easily back in to its protective tube. So now, let’s go fly a kite!

We had to find a spot that would have some wind, plenty of space and free of telephone and electrical wires, far enough from trees and lots of people. We knew the perfect space. Except when we got there, we realised just how windy it was that high up!

We assembled the kite in the open boot. As we already knew how to assemble it the instructions weren’t needed, and we had it built in minutes. As we got it out of the car and the wind already started to tug at it, we realised we should have found somewhere lower down and less windy (not at the top of a hill) but as we were already here we decided to give it a go.

We decided that as it was quite windy the adults would try it first, and we were very glad we did. To launch, the kids threw it up in the air and the wind caught it straight away and started tugging quite hard. We slowly let out about 100ft of string (the spool has about 300ft/90m) and decided that because of the strong wind we wouldn’t let out any more. Because of the wind, we decided that it wouldn’t be ideal for the kids to fly it by themselves, so each adult helped each child (the wind was so strong we were worried about the wind just tugging it out of their hands).

The Kitedrone is very light and quite easy to fly (even in strong wind). While we thought that the wind was too strong and may damage the kite, it didn’t as it is made from ripstop fabric, which is incredibly light but completely resistant against tearing. Even when we brought it down and hit the grass there was no damage.

We had a great time flying the kite. The kids were a bit disappointed they weren’t allowed to fly it on their own, but the wind was just too strong – next time we will go on a less windy day or a lot lower down. It is an excellent way of encouraging the kids to get out of the house and play (and gives them a bit of exercise) and is a great family activity. You could even take a picnic and make a day of it during the summer.

Overall, the Kitedrone very easy to assemble/disassemble, easy to store, is very lightweight while being sturdy and lots of fun. If I had to make any improvements, I would probably add a wriststrap to attach the spool to the wrist (although I don’t know how feasible that would be, especially in strong winds).

We received the Hot Rods version, but it is also available in Tiki Surfers, Unicorns and FortNite designs. At £24.99 it is excellent value for money due to it sturdy and top-quality design and the hours of fun that can be had with it.

One other feature to mention, once you get used to flying the kite you can add a GoPro or similar camera to record your flight.

Definitely a 5-star toy to get the kids (and family) outside this summer.

Available to buy from Amazon.