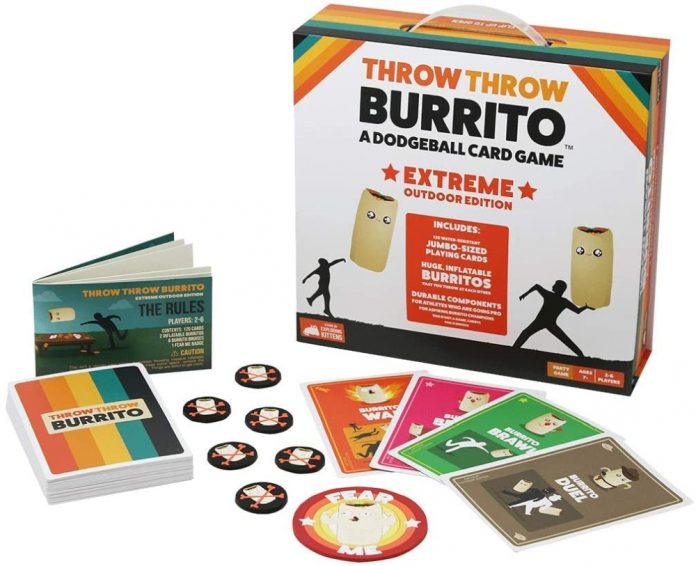 We had the first warm day of the year yesterday, and with it being the beginning of the Easter holidays, we decided to take advantage and spend the day in the garden. My youngest will happily spend hours in the garden, tending to her veggies and looking after the greenhouse, but my eldest needs a bit more encouragement to be outside and it can sometimes feel like a battle sending her outside to get some fresh air rather than her actually wanting to be there. Well, we thought, what better encouragement for spending time outside than a bit of organised yet totally disorganised and mad fun?

Yep, we spent yesterday afternoon lobbing 3ft inflatable burritos at each other whilst matching giant oversized ‘Barky Sharky’, ‘Floaty Goaty’ and ‘Goth Sloth’ cards. Exploding Kittens are known for their larger than life, fun and slightly mad games, and the Extreme Outdoor version of Throw Throw Burrito is no exception. The game is an extreme, outdoor version of the popular Throw Throw Burrito, and the aim of the game is to make matching sets of three cards to earn points, whilst all the time trying to get your opponents to engage in Burrito brawls, wars and duels. The set comes in a sturdy cardboard carry box with a plastic handle. Contained in the box is:

The first thing you need to do to play is inflate your burritos. I would probably suggest using some form of pump to do this – we started off trying to blow them up manually and it was hard going and resorted to a foot pump that we had from another toy, which made it much easier. The inflated burritos are pretty huge, and it soon became apparent that this game really is outdoor only; even if you had massive rooms with high ceilings, something would get broken if you tried to play this indoors (a smaller, indoor version is available).

After we got our burritos blown up, we sat down to play. The game is for 2-6 players, aged 8+. Each player is dealt approximately 15 cards (the exact number doesn’t seem to matter!). They pick up and look at five of these cards, leaving the remainder face down to their right, which becomes their ‘draw’ pile. Any cards left after the cards have been dealt are put in the middle of the table as a community draw pile. The idea is to create sets of three cards, so a player would look at their five cards, discard one by adding it to the player on their lefts draw pile and pick up another from their own. All players play at the same time and there is no turn taking, which adds to the slightly frantic feel of the game. When a match of three ‘normal’ cards is made, that set of three is places in front of the player.

If a set of three Burrito Brawl, Burrito War or Burrito Duel is made, that’s where the fun really begins! The person who makes the match calls out whether a Brawl, Duel or War is required and the players involved immediately hotfoot it to wherever you have designated as the arena. In basic terms, all three of these matches involve lobbing giant burritos at your opponents, with the first person to be struck by a flying Mexican snack losing the match. When a brawl is called, the players to the immediate left and right of the person who made the match have to fight it out. When a war is called, all players at the table except the person who made the match are involved, and when a duel is called, the person who made the match can nominate any two players (including themselves, if they want) to stand back to back, shout “one, two, three, BURRITO” simultaneously whilst stepping away from each other. On the shout of “BURRITO”, the players spin round and take aim! Again, the player who is hit first by a burrito is the loser of the round. In any of these rounds, the losing player has to take the walk of shame back to the playing table and collect their Burrito Bruise token.

Once all six bruises have been taken, the scores are tallied up. Each normal set of three cards is worth one point and a set of three brawl, war or duel cards is worth 2 points. Once each player has counted their points, then deducted one point for each bruise card that they have, a winner of the round is declared. That player holds the Fear Me token for the second round. The game is played over two rounds, so the process then repeats itself. If the same player wins the game again, they are declared overall winner. If a different player wins, the two players then have to battle it out in a final duel to determine a final winner.

We all had fantastic fun with Throw Throw Burrito, and it’s a fantastic way to encourage even the most reluctant teens / pre-teens outside and off their screens. It’s surprisingly active too, and definitely gets the heart rate going – sometimes it feels like no sooner do you sit down after taking part in a brawl do you have to get up again for a duel! We played the card part of the game on the decking and had the burritos on the lawn, so we had to run to the lawn each time we had to fight. This worked really well as it kept airborne burritos away from the cards and meant we could throw freely, without worrying about knocking the table or any drinks.

I would totally recommend Throw Throw Burrito to anyone who has a bit of outside space for this summer. It’s great fun, a fantastically well thought out concept and we absolutely loved it. And my daughter has fallen a little bit in love with her burrito (they are really cute!) – it even had lunch with us yesterday!

For more information or to buy, visit www.explodingkittens.com. Also available to buy from Amazon here.

DISCLOSURE: We received this product for free for the purpose of writing an honest and impartial review. All thoughts and opinions are our own. This review uses an affiliate link which we may receive a small commission from if you purchase through the Amazon link.