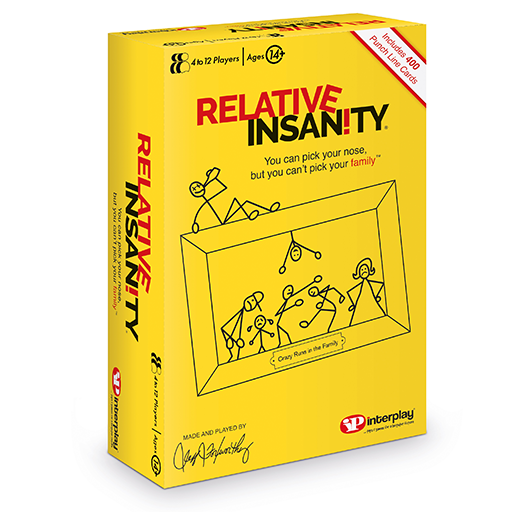 Most people have board games of some sort in their house, and we bet that if you have a few a majority are probably either children’s games or games for families with young children. Our house isn’t any different. But what about games for older teenagers and adults? Pre-teens and teenagers just want to play on their phones or games consoles, whilst adults want to play something a bit more grown up than Happy Hippos. Well we don’t like the kids having too much screen time and do try to limit it where we can and have been adding some games to our collection to suit teenagers and adults. We were happy when Interplay’s Relative Insanity arrived, a card game suitable for 4 to 12 players, aged 14 years old and upwards – and perfect for all the crazy family members in the house or ones with a wicked sense of humour.

Relative Insanity is not a board game but a tabletop card game that has been created by American comedian Jeff Foxworthy. There is no board to setup, no dice to role, no counters to move, no pictures to draw and certainly no questions to answer. It comes with just 500 cards. If you are already put off at the thought of playing a card game, don’t be – it is nothing like traditional card games, Relative Insanity is a completely different prospect and is absolutely hilarious (even the most cranky, grouchy and cantankerous teenager will find it funny – they just might pretend that they don’t to keep up the moody teenager persona).

In the box there are:

So what is Relative Insanity? We already know that it is a card game for 4-12 players aged 14 years and upwards. It is a hilarious game that turns all the players into comedians with the aid of Punch Line cards – the players have to provide a punch line to a setup card and be first to score five points. Although be warned, if you get offended easily or don’t have a sense of humour or your funny bone has gone missing, this probably isn’t the game for you. It is different every time that you play it, and some of the answers are just insane, outrageous and hilarious.

Game play is very simple. Each player is dealt seven Punch Line card (the yellow ones) with the remaining cards placed face down in the centre of the playing area. The Setup Cards (the red ones) and placed face down next to the Punch Line cards. The starting player (with Relative Insanity that is the one who owns the game and not the youngest player as with a lot of other games) picks a red Setup Card off the pile and reads it aloud to the other players, so for example:

“When my brother brought out his new baby to show to the family, Granny blurted out…”

Now comes the fun part that involves all the other players.

The other players have a peruse through their yellow Punch Line cards (or hand) and choose one that will complete the phrase on the Setup Card with the most hilarious effect. Example answers are:

“I just vomited a little bit in my mouth.”

When a player has selected a card that they think has the answer that will illicit the most laughs the cards are passed over to the player with the Setup card. The cards are then shuffled so the players do not know whose card is what. The Setup card is then read aloud again followed by reading aloud the answer from each Punch Line card. Some of the answers are absolutely hilarious, bringing a barrage of laughter to the table.

Once the laughter has subsided a winner of that round has to be chosen, after all someone has to get to five points to be the winner of the game. This is decided by the player who played the Setup card. That player has to carefully consider which answer was the funniest and that player is awarded a point by handing the Setup card to the player who had the winning punch line. The Punch Line cards that have been played so far are then taken out of play and each player then replenishes their hand from the pile of face down Punch Line cards. Play continues around the table until one player has five red Setup cards and declared the winner.

Overall, we found Relative Insanity to be a very simple game to play, much more grown up with the answers given from the cards and a really fun party game for family and friends – a toned-down version of Cards Against Humanity. We have loved playing a game for just the adults without having to change rules to accommodate the kids or playing younger games. It is definitely a game for adults or families with older children, but just be warned, if you are of a very conservative nature, prudish or completely lacking in humour then you will have a problem with some of the punch lines and maybe not enjoy the game as much as others. Whilst the punch lines are not very offensive, they might cause some blushes around the table. With punch lines such as “She only seems stupid when she talks”, “Does he ever take his hand out of his pants?” and “I just vomited a little bit in my mouth.” it is guaranteed to give most players a laugh and gets everyone (teenagers as well as adults) away from their phones, tablets, televisions and other screens.

Relative Insanity is definitely a “Winner winner chicken dinner” game for adults and families with teenagers. It is a fantastic, fun and hilarious game for game nights when the kids have gone to bed. With 100 Setup cards and 400 Punch Line cards the game is different every time and the different combinations ensures that the game will be played and loved for a very long time.

For more information or to buy, visit PlayMonster.