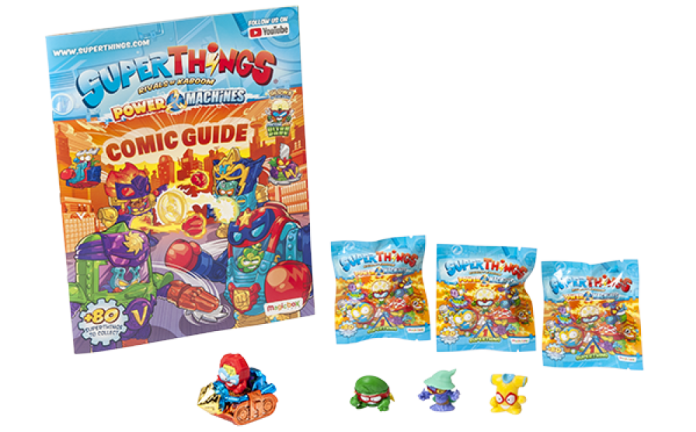 Children just seem to love collectible toys, and it seems to be the smaller they are the more they like them (and the more they seem to get hidden and stuck in a rug for me to step on). And then there are the blind bag versions that they just crave, with the excitement of not knowing what one they are going to get (only to be replaced with disappointment when they don’t get the one that they really wanted). We have had various versions of these collectibles and the kids don’t seem to be losing interest and were absolutely delighted when some new ones arrived – SuperThings Power Machines.

SuperThings Power Machines, from Magic Box Toys, taps into the ever-popular ‘hero vs villain’ format which has proved immensely popular with children, becoming the number one action figure on the market.

In SuperThings Power Machines, a new Ultra Rare glow in the dark character – Dr Volt – arrives in Kaboom City! As a clever inventor of the Power Machines, Volt makes his two gold rare leaders and six silver rare Team Captains. When a riot breaks out in the lab, half of Volt’s force become villains who then escape with a number of Power Machines. Now the battle to save Kaboom City continues! Using everyday objects and food as collectible characters, SuperThings Power Machines will see a further 80 characters unleashed from Kaboom City. In addition, there will be eight Power Jets to collect, eight giant Power Bots robots with a secret compartment and added value packs to start the collection. In addition, eight Battle Spinners are rip cord operated spinning capsules which all house a SuperThing to propel them into battle and the Battle Arena Playset will bring together all the characters under one roof to fight it out once and for all. To support the toy launch, brand new Webisodes for the Power Machines series will launch on the SuperThings YouTube Channel.

There are 80 new SuperThings to collect with silver ones, gold ones and the ultra-rare Dr Volt, who glows in the dark and we received a sample to try out, including:

To introduce the SuperThings to the kids we opened the Starter Pack first, it seemed the obvious place to start. SuperThings are either superheroes or supervillains and come in all sorts of guises from every day household objects to food items, with fun names such as Pancrash, Brock Cool, Metal Teeth and Power Gopher. The Starter pack comes with a 24-page comic guide to introduce all the characters, one metal Power Jet that is exclusive to the Starter Pack and four blind bag SuperThings figures. The kids enjoyed reading the comic and getting to know the different characters and Kaboom City.

There are 80 SuperThings characters to collect from the Tech Masters, Electric Squad, Cyber Fighters, Wicked Circuits Energy Brigade, Mechanic Warriors and Specials categories (you can see the full list of characters on www.superthings.com), consisting of:

They loved opening the blind bags of the SuperThings and Power Jets as they had no idea want they were going to get and had already picked out some of their favourites from the comic guide.

The Power Bot has 8 characters to collect (4 characters with 2 variants) and we received one of the Steel Boxer ones. These are a lot larger than the SuperThings and there is a button on each arm that you can press for it for make a small punch. You can see what one you are buying as it comes in clear packaging.

Overall, the kids have loved opening and playing with the SuperThings. With kids loving small collectibles and blind bags, these are excellent, especially with the fun and unique names and the cartoons to watch on their own YouTube channel.

The SuperThings characters are made from rubber (better for me when I step on them as I undoubtedly will) and are colourful and fun to look at. The kids are going to have great fun expanding their collection.

SuperThings Power Machines are available to buy as a Starter Pack, blind bags and blister packs from Amazon here.

For more information, visit www.superthings.com and don’t forget to check out the SuperThings YouTube channel.