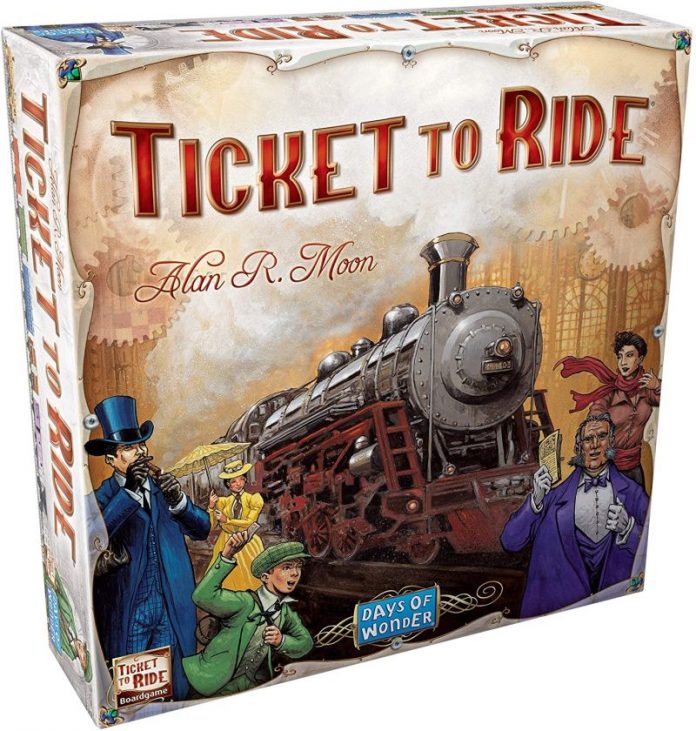 As a family we love to sit down around the kitchen table of an evening and play board games; board game classics such as Monopoly and Cluedo, tabletop games like Dr Eureka and Clock It! and even card games such as Top Trumps. This kind of gaming and family entertainment is definitely having a resurgence, and we are very glad it is as sitting around the table playing games, enjoying each other’s company, talking to each other and catching up on everyone’s day whilst having fun is a much better way of spending time together than sitting in silence around a television screen.

As the kids are getting slightly older, they are now both in double digits, we thought we would introduce them to a new type of board game – a strategy game, a game that requires planning, thinking ahead and strategic blocking. This led us to Ticket to Ride.

Ticket to Ride is a family-friendly, cross-country train adventure board game. Players have to travel across North America and Canada by train, claiming railway routes by collecting matching cards to link up cities. The longer the route, the more points you earn. It is a strategy board game for 2 to 5 players, aged 8+ and has a playing time of 30-60 minutes. Don’t do what we originally did and let the description fool you, it is an excellent fun game whether you like trains or not.

The idea of the game is to earn as many points as you can by collecting train routes between different cities in North America and Canada. It is deceptively simple game where tactics and strategic planning will come into play, a game of patience and planning. What routes are you going to claim? Do you go for the shortest routes (less points) or the longer, more complicated routes (to gain the most points)? Should you block routes of your opponents and force them take a more complex route? The one to collect most points (not necessarily the one with the most routes) is the winner.

Setting up the game is quick and simple and only takes a few minutes. You will need a rather large playing area for the large board and pieces, we used the kitchen table. Unfold the six piece large game board, a map that represents train routes that can be found North America and Canada, linking various cities together, and place it on the table (or floor). Each player (up to five can play) is given 45 train pieces, each person has a different colour (blue, black, green, red or yellow) along with a matching colour scoring marker. Markers are placed on the number 1 position on the numbered squares around the edge of the board. Shuffle the train cards (do this well, especially on the first time of playing) and deal 4 cards to each player, placing the remaining deck of cards next to the board. Take five cards from the top of the deck and place them individually face up on the table. Place the Longest Path Bonus Card face up next to the board. Shuffle the destination ticket cards and deal 3 to each player (don’t let other players see your cards). The game is now all set and ready for the fun to commence.

Game play is simple although you might need to read the rules a couple of times to digest how to play. On first read of the rules it sounds like it could be a complicated game, but it really isn’t. We read the rules twice and jumped straight in to playing, where everything then made sense.

The starting player (the most experienced traveller – sorry kids, that probably won’t be you for a change) draws two train cards from the deck or from the five face up cards on the table and then play continues around the table. On each turn each player can only complete ONE action – draw train cards, claim a route or draw destination tickets (players can draw 3 tickets, look at the cards and decide which to keep – at least one must be kept but you can decide to keep two or even all three should you wish).

Routes are claimed by collecting train cards of matching colours. Locomotive cards are wild cards and can be used as any colour. When you have claimed enough matching cards to complete a route (shown by coloured spaces on the board), you can claim the route and place your trains on the board to link the cities or segments of the route together. If you place trains on the board, depending on how many trains placed determines how many points you score to move your marker around the edge of the board. If you complete a route that matches a destination card that you hold, the number in the corner of the destination card is the number of points that you will win (these are added to your score at the end of the game).

That all sounds simple enough, doesn’t it? But other players can claim segments of another player’s route to block them, forcing them to take much longer, indirect routes. This makes the game much more fun and adds an element of strategic thinking into the game.

The game ends when any players train stock has reached 2 or less trains. Points are then added up – points earned around the edge of the points and then points from completed destination routes. To make it more interesting, any uncompleted destination cards a player holds has those deducted from their score. The winner is one with most points.

Overall, we absolutely love this game – kids included. It is a fairly long game to play, average game play is around 30-60 minutes but our first go took about 90 minutes whilst we were fully getting to grips with it (and this just flew by).

It is a simple game to set up, although you do need a big playing area as the board is quite large.

Once we all got into the swing of playing the game, we all found it very easy to understand and play (including the just turning 10 year old). We started the game playing without the strategic blocking whilst everybody learned how to play (might be a better way for younger families to play) and have since worked up to adding in our own strategies.

It is an excellent game to play. It is fun and interesting, and we were even learning new cities and where places are situated in North America and Canada.

The cards are small, but readable for all and the plastic train pieces are good quality and are easy to place on the board (and are just the right size to use, not too big or small).

With a full RRP of £44.99 it is quite expensive (although it can be found cheaper online in most places), but you do get a lot for your money and the entertainment value you will get from it is more than worth it (especially as you can register your game online for more maps and other benefits and even play along with Amazon’s Alexa).

This is an excellent family-friendly game that is lots of fun and the strategic blocking can make it quite competitive. Don’t be fooled about the trains, it is not a game for people for people with an interest in trains – they are just a means to travel across a vast country and track progress and the kids loved them. The game is suitable for families, for the kids to play together and for the adults to play together – the appeal is great, the age range is brilliant and the playability is just excellent (it has been going for 18 years and is still going strong with expansion packs and other versions of the game – we want to try Europe next).

Ticket to Ride is an excellent addition to any game cupboard. It can be played by wide range of age groups and combinations and is extremely enjoyable.

DISCLOSURE: All thoughts and opinions are our own. This review uses an affiliate link which we may receive a small commission from if you purchase through the Amazon link.