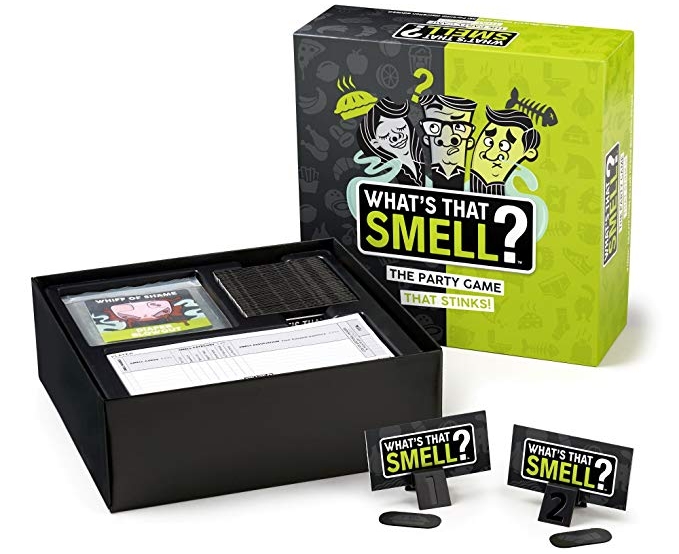 Growing up we didn’t have computers, phones or tablets and we would spend family time together playing board games. As an adult I have continued to play board and feel that they are of great benefit not only to family, but to friends as well. Not only are they a great way of spending quality time together, they are loads of fun. So, I was delighted when I received What’s That Smell? from WowWee, and not only because the title appealed to my sense of humour! Let’s face it, this game really stinks! (but in a good way – if not easily offended by the odd bad smell).

What’s That Smell? is a party game for 2-6 players, aged 14 and above. It challenges players to guess the smell on the scratch and sniff cards, using their nostrils. While some smells are nice, others are outright nostril-abusing revolting! Playing time is from 15 to 30 minutes (depending on how many players). The best sniffer wins and that means that he or she gets to choose the loser who has to sniff one the stinky Stank Cards in The Whiff of Shame!

To help play the game there is also a free What’s That Smell? app (for Android and iOS) available to download for free. It also captures “The Whiff of Shame” in slow-motion glory on the ReekCam. This app is optional and is not necessary to play the game, you can just use a timer (one is not supplied). Once you have recorded your video it can then be shared on your favourite social media platforms.

As for playing the game, it is really easy, providing your nose can take it! Each player takes a Mystery Whiff Card, Scorecard and a Whiff Strip. They open the first fold of the card, so that the smell zone is visible, but not the answer, and place it in their cardholder.

We played the game using the app (alternatively you can play it with a timer or stopwatch). After opening the app we selected Party Mode, followed by the number of smells we wanted to play with (2 to 6, this would be the number of players) and finally the number of seconds per round (30s, 45s or 60s). Once everybody was ready, we hit the Let’s Play! button and prepared to have our noses assaulted. Each player then uses a Whiff Strip to rub over the smell zone on their Mystery Whiff Card (just once or twice, there is no need to furiously rub it as it will damage the card). Each player then sniffs the card and has to write down on their scorecard what they think the smell is, what smell category they think it is from and a smell association (your funniest memory associated with that smell).

The game finishes when every player has smelt all of the cards. If there is a tie, the tied players take part in a rapid smell-off round where each player gets 15 seconds to name the smell of a random mystery card. Scores are then added up. The player with the highest number of points is the winner.

But that is not the end of the game! Someone needs to lose and the winner decides who! The winner chooses one of the losing players to suffer the dreaded “Whiff of Shame”. The chosen player has to take 3 big whiffs of one of the Stanky Cards (Diaper Blowout, Extra Old Toe Cheese, Smothered in B.O. and Hot Chunky Vomit) handed over by the winner, not a pleasant experience! If you are using the app, you can film their reaction on the ReekCam in slow-motion and share with your friends on social media.

Overall, this is a scentastic nostril abusing and fun party game for teenagers and adults with a sense of humour. It is easy to set up and has a quick playing time. Some of the smells are quite nice while others are just foul.

While the cards are scratch and sniff, if the storage and care instructions are followed it is not a single-use game and the cards should last for quite a while (the 4 Stank Cards are stored in a reusable bag).

So, if you want your house to be filled with fun, laughs and the smells of more than just cooking and air fresheners, then I can highly recommend What’s That Smell?

Extra expansion packs of the Mystery Whiff Cards and the Stank Cards to extend the playability of the game would be great along with the inclusion of a 1 minute sand timer.

What’s That Smell? really is a stinker of a game.