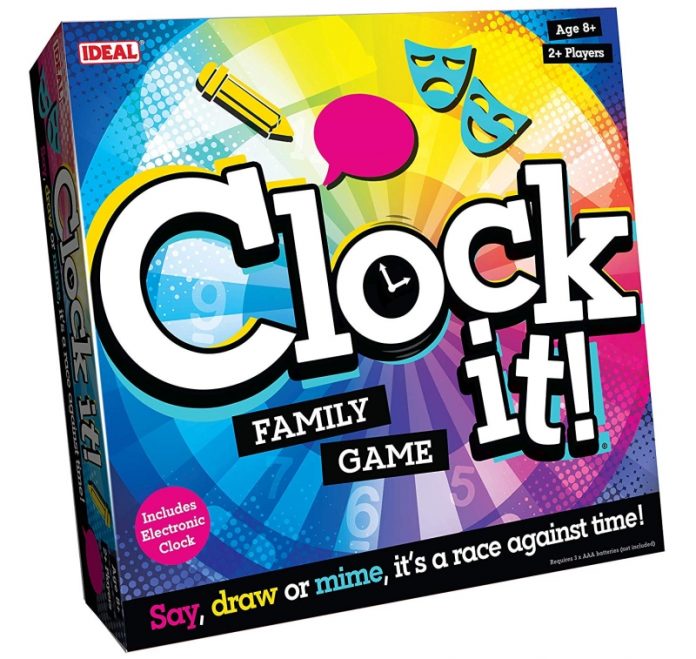 How do you spend your evenings with your family? Do you do something together or do you all do your own thing? In our house if the kids had their way, the eldest (11) would spend all her time staring into a screen of some sort whilst the youngest (9) will quite happily vary what she does with crafts, games and toys and some screen play. Fortunately, the kids don’t have their own way and screen time is limited in our house (much to the frustration of the eldest) and we try to make a real effort to put down the phones, tablets, laptops and turn off the television. That then means we actually have to do something. Whilst we sometimes sit down as a family to watch a family film together, we do like to do things without the aid of screen and we do all like sitting around the kitchen table playing board/tabletop games together – they are excellent fun, a great way to spend some quality family time together and best of all, they get everybody talking!

Recently we have been enjoying playing escape room and logic puzzle types of games, but the escape room type games are generally one use games, so we hit our shelves and pulled out a game that we hadn’t played with in a long while and really had a blast. The game we choose for our recent game night (and have played several times since) was Clock It!

Clock It! is a tabletop game for 2+ players, aged 8 and above. If you have ever enjoyed playing Pictionary, Charades, Taboo or Articulate then Clock It! is a combination of them all and is a clock-themed, fast and frantic combination – Say, draw or mime… it’s a race against time!

Clock It! is a game centred around a clock face, which is the game board and uses an alarm clock as a task selector and timer. It is a game that can be played in teams, with a minimum of 4 players, or individually with 2-3 players. Contained in the box is:

The idea of the game is very simple, win as many game cards as you can by answering questions that are mimed, described or drawn by your teammate or opposing players. Simple? Not really. You are up against the clock and as easy as it might sound, it is surprising how quickly your mind can draw a blank, especially when mimes and descriptors are completely off-base and only mean something obscure to the describer.

We started off by reading the instructions. These were very simple and easy to understand, and once we had the table set up and were playing within minutes of opening the box. With 2 adults and 2 child players we decided to play the team version rather than the individual players, one child per adult.

First up, we installed the batteries in the alarm clock. The clock requires 3x AAA batteries, which are not supplied – you will need a crosshead screwdriver to open/close the battery compartment. The clock game board was placed in the middle on the table, within reaching distance for all players and we placed a game card at each number point around the clock (12 cards in total) – the cards are double-sided with a picture or word on them and you can place them any way you choose (all words, all pictures or a combination). We decided on how many rounds we would play and were ready to play.

To start you need to remove the clock key from the back of the alarm clock, insert it into the clock and turn to the game mode that you want to play. The clock has four modes:

We play our games in Combo Mode as we fell that this is the most fun and gives a great deal of variety to the game and brings all skill levels into line as you require other ways to describe something rather than just talking.

When we were ready to play, we turned the key to Combo and started with the fast, frenetic fun. The Describer has the clock and pushes the bell on top to start. The clock face will illuminate either the say it, draw it, or mime it icon as well as a number. The Describer then has to pick a card at that number and either say, draw or mime (depending on what the option is on the clock) and the other players have to try and guess what it is, continuing around the board before the clock alarm goes off. Used cards are replaced with new ones from the pile and the other team takes their turn. When the number of rounds decided before the start of the game has been played, the team with the greatest number of cards is the winner.

Overall, we really loved this game. The speed of the game is brilliant, it puts your mind to work with fast thinking skills as well as your language skills, acting skills and drawing skills. Some of the mimes are descriptors that were used within our games created belly-hurting laughs as they really did take some of the items on the cards to new extremes that clearly meant something to the Describer, but sadly to no one else. We found this to be an excellent family game that is quite fast and lots of fun – trying to describe things with drawings, mimes or language shouldn’t be that difficult but the time pressure makes it so and creates some wonderful, funny results.

This is a fun family game that is fast, frantic fun suitable for a variety of ages and leaves no one at a disadvantage. It is simple to setup, quick to play and leaves all the players, winners or losers, with a smile on their face.

DISCLOSURE: This review uses an affiliate link which we may receive a small commission from if you purchase through the link.