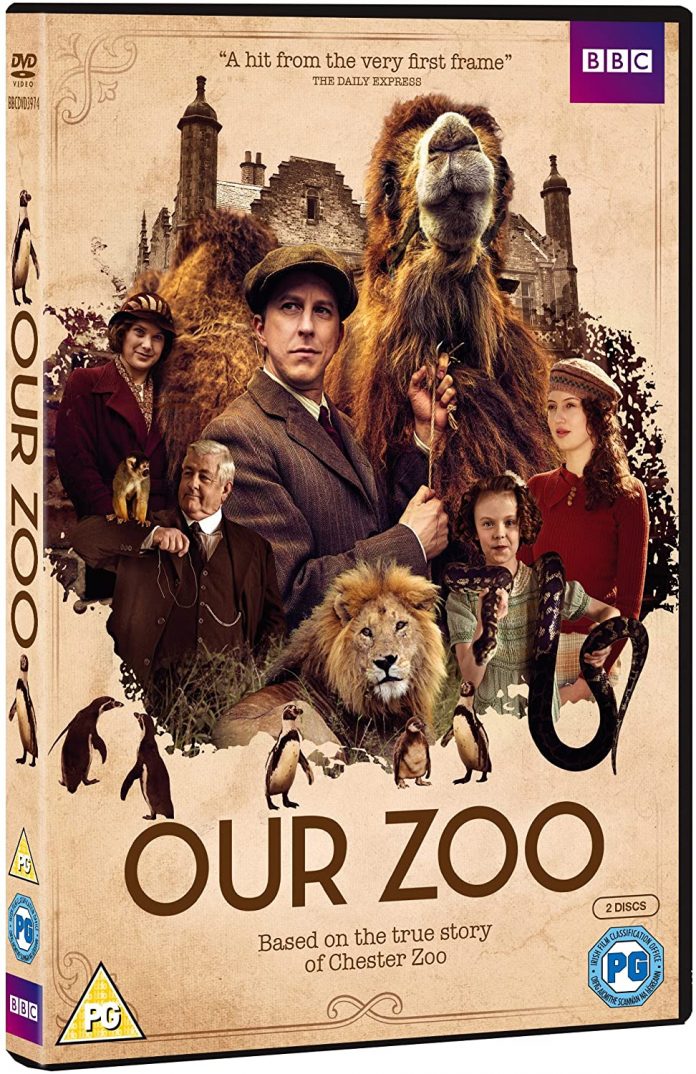 Our Zoo is a six-part BBC period drama set in the 1930s and is based on the true story of one man’s dream to build a zoo. It follows his quest to get his vision off the ground, the impact it had on his life, his family and the people of the small village of Upton. This zoo has since become one of the UK’s largest zoos. I am, of course, talking about Chester Zoo.

George Mottershead (Lee Inglebury) is an ex-soldier who served in World War I. After returning home, suffering from shell shock (or today would be called PTSD), he works in his family’s shop. Whilst out picking up supplies he stumbles into the quarantine area of the docks and purchases a monkey that was about to be destroyed, and also a parrot. He takes these home for his youngest daughter, June (Honor Kneafsey). June loves the animals, but the rest of the family are not so impressed and want them to be re-homed. The animals are helping George with his shell shock so whilst trying to re-home them he ends up purchasing a camel from the circus to add to his collection of animals. When he homes the animals in the backyard of the family shop, it goes to say that the family (apart from June) were not happy. He then decides that he needs to build a zoo, but a zoo without bars – using natural barriers so the animals can roam free without being a danger to the public.

Whilst attending a veteran’s reunion he stumbles across an old ramshackle house, Oakfield House, on the outskirts of Chester in the small village of Upton. The house has been abandoned and is up for auction. With the help of a large bank loan and the selling of the family shop and their home, he manages to win the bidding and purchases the house and grounds. This is the beginning of his dream to build a zoo, a zoo that the British public have never seen. It is also the beginning of lots more trouble as the people of Upton are very much against it.

George is very single-minded (which causes his family to constantly worry about his mental health) and his efforts to realise his dream puts a terrible strain on the family, especially his loving wife Lizzie (Liz White), his children June and Muriel and his parents Albert (Peter Wright) and Lucy (Anne Reid). But with the help of his family, Lizzie’s lovable dodgy dealing, mischievous brother Billy (Ralf Little) and their mysterious neighbour Lady Katherine (Sophia Myles) he hopes to win over the local community and build his dream.

Overall, this is a delightful, heart-warming family drama of the struggle to build the now famous Chester Zoo. Not only does it show how one man’s vision to help animals and change the way zoos work was achieved, but it also shows the effect the venture has on the lives of his family, friends and an entire village. With determination and hard work, belief and escaped animals along the way, it is a drama that has a good mix of humour, mystery and sadness.

Our Zoo is an excellent family drama. It is based on a true story and there is not one weak member of the cast. Ralf Little has to be my favourite, he is perfect as the mischievous brother-in-law supplying a lot of the humour with his Arthur Daley / Del Boy type tendencies. Even the animals are great with Mortimer the monkey running loose and always sitting on someone’s shoulder and watching the penguins matching through the middle of the village is a sight to see.

This is BBC drama at its best and a drama that the whole family will enjoy.