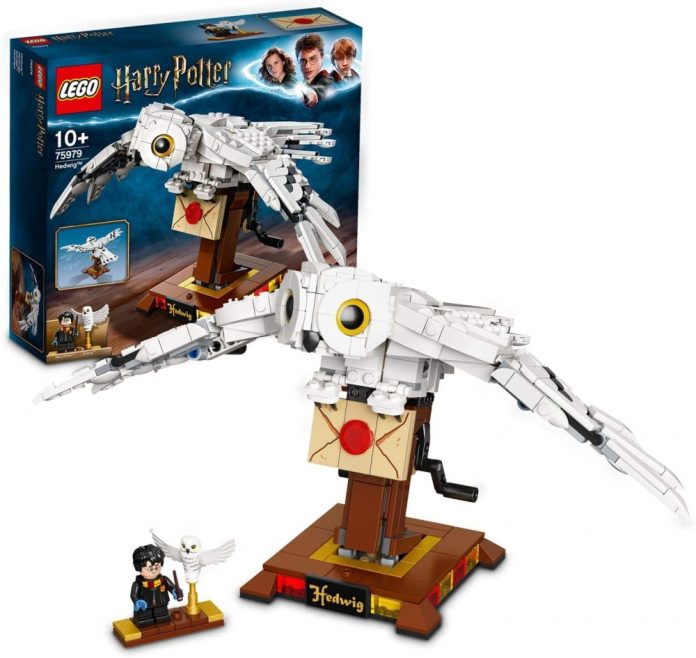 Where screens seem to be a massive part of our lives, and that includes the children, trying to get the kids to give them up and do something else that is completely screen free can be a bit of a challenge at times. In our house we try and limit screen time as much as we can, but sometimes it is just easier to give in. The kids have plenty of games, puzzles, books and toys and we do change these as they get older for more age-appropriate ones so that they don’t stagnate (and with kids that have three years between them means that the eldest one’s toys get passed down to the youngest prolonging their usefulness and playability).

This weekend this eldest finally picked up one of her new toys that she got for Christmas and I couldn’t wait to help her with it as it was my favourite toy as a child. She received a LEGO set, a set based on her favourite interest at the moment – Harry Potter. She is a big fan of Harry Potter and has her favourite characters, one of them being Hedwig the Owl. For Christmas she received a mechanical LEGO set of Hedwig.

LEGO is a timeless construction toy from Denmark that has been around since 1932 and is a toy that inspires creativity, can help with teamwork and social skills which in turn help with communication skills, can help with fine motor skills and developing dexterity, helps with problem solving and spatial awareness, helps to learn patience and to think about what you are doing. It also gives a good sense of achievement when you complete the models.

When she got out the LEGO set to start building I think I was more excited than she was, her level of excitement was somewhat muted to say the least. And then she started to build and that all changed.

The LEGO Harry Potter: Hedwig the Owl set is a 630-piece set suitable for children aged 10 years plus. It is quite a large and realistic model of the snowy owl in flight, delivering an invite to Hogwarts, and even has mechanical wings (the owl’s realistic jointed, detailed wings span over 35cm) and moving head and tail feathers. When built, it measures 7.8″ (20cm) from beak to tail and is 6.7″ (17cm) tall and stands on a very study base. Once finished, it is a very impressive display piece for any Harry Potter fan. It even comes with a smaller detachable version of Hedwig with a detachable mini figure of Harry Potter that has its own stand or can be displayed on the base of the larger Hedwig stand.

So on a Saturday afternoon we sat down to build and to be honest I thought she would start and I would end up finishing. But such is the power of LEGO, she got well into it and completed it all by herself with very minimal input from me.

In the box are four numbered bags of LEGO bricks and a thick manual of building instructions. It was all slightly different from what I remember as a child as the bags are numbered and relate to a section in the building instructions. This means that the owl is built in four different sections and all the pieces for each section are in the relevant numbered bag. As Hedwig is a challenging and complex model with moving parts, having it split into four different sections meant that it wasn’t too overwhelming, LEGO bricks weren’t all over the place (meaning nothing got lost) and meant there were natural places to take breaks.

She decided that we would do bag number one and then stop for the day. She spent about an hour examining the instructions and assembling the stand for the owl, impressed that when this part was complete she could see how cogs worked and how the handle she had assembled would turn whatever was placed onto it (I think her words were “That’s cool”).

Now I have already said she wanted to stop for the day after bag number one as before starting she didn’t seem that keen, but once she realised that she could follow the instructions and work out any problems she came across and that she was pleased with what she was assembling, the LEGO bug hit and we had to start on bag number two straight away.

Bag number two was a bit more complicated as it was putting together the body of the owl and a wing. She spent another hour on part two before breaking for dinner. She was over the moon with what she had assembled so far and pleased that she could see the owl appearing before her eyes. Again, she had very little input from anyone (despite her younger sisters cries to help) and she was getting faster and better at reading the instructions and figuring out how to fix errors when she did go wrong.

She finished bag number three after dinner before deciding that it was enough for that day, she had spent about three hours on it so far but was over the moon with the emerging figure.

The next morning she spent around 45 minutes finishing off the last of the wing and head.

Once completed she was absolutely delighted with her Hedwig model, not only did she have a model of one her favourite Harry Potter characters, but she had built it herself. The sense of achievement was clear to see on her face. Not only did she had a model that she could put on display in her bedroom that she has assembled herself but by turning the handle on the base she could make the jointed mechanical wings move, making Hedwig look like it was actual flying and his wings going up and down. She was very impressed in how this worked and had learned how cogs work to move things.

Overall, she has loved building a LEGO model, more so than she will ever admit, and has even asked what other models are available. It has helped that it was a one of her favourite characters from books she has read and films she has watched.

Hedwig is quite a complex model to build and does require some time and patience, but the end result is brilliant, not just the model but the sense of achievement and enjoyment on a child’s face.

The age guidance over 10 years plus is probably about right.

The instructions are fairly easy to follow, but you do have to have to focus on them and give them proper attention and not try to rush through them.

Once built, it is a toy to put on display rather than play with, but it really does look very impressive.

The LEGO Harry Potter: Hedwig the Owl is a very rewarding and enjoyable experience and has helped our young builder with her confidence as she now knows that she can do it (instead of her go to response of I can’t do it) and is quite capable of following detailed instructions (although the 145-pages instruction manual can seem a bit daunting before starting) and can achieve things she decides before trying that she can’t.

The only issue with this set was that the LEGO bug took over and she built her own model Hedwig with hardly any input from anyone else (and that I didn’t get to finish it).

An excellent LEGO model that takes a good few hours to assemble, promotes confidence, helps with fine motor skills and dexterity, teaches how to follow instructions, delivers a real sense of achievement when the model is completed it gives you a good model to have on display in your bedroom.

This website uses cookies to improve your experience while you navigate through the website. Out of these cookies, the cookies that are categorized as necessary are stored on your browser as they are essential for the working of basic functionalities of the website. We also use third-party cookies that help us analyze and understand how you use this website. These cookies will be stored in your browser only with your consent. You also have the option to opt-out of these cookies. But opting out of some of these cookies may have an effect on your browsing experience.
Necessary Always Enabled
Necessary cookies are absolutely essential for the website to function properly. This category only includes cookies that ensures basic functionalities and security features of the website. These cookies do not store any personal information.
Non-necessary
Any cookies that may not be particularly necessary for the website to function and is used specifically to collect user personal data via analytics, ads, other embedded contents are termed as non-necessary cookies. It is mandatory to procure user consent prior to running these cookies on your website.
SAVE & ACCEPT
MORE STORIES