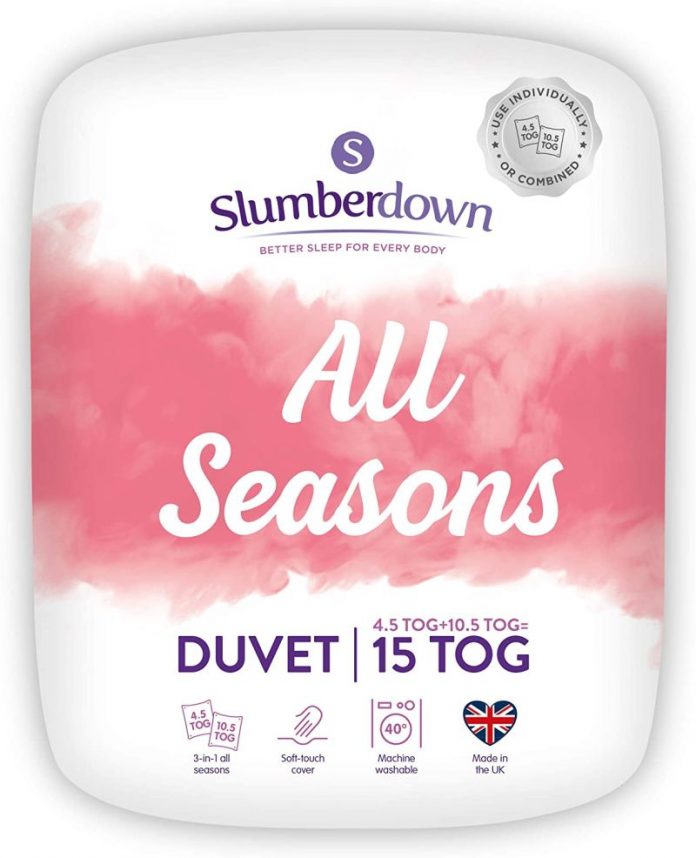 Spring? Summer? Winter? Do you know what season we are actually in with the weather being very changeable at the moment? Over the past few weeks we seem to have experienced all kinds of weather from the chilly wintery snowy nights, heavy rains and heavier winds to bright hot sunshine – winter coats to t-shirt weather and back again. Apart from not knowing what type of clothing and footwear to wear on any particular day, it makes going to bed for a comfortable nights sleep a very difficult prospect – a winter duvet on a warmer day is just too hot and makes for uncomfortable and interrupted sleep, whilst a thinner summer duvet will just be far too cold to get any kind of sleep.

As the weather is so changeable at the moment, the best choice of bedding is pretty hit and miss – and having to sort through a cupboard of duvets to get the correct tog rating is a pain. Slumberdown seem to offer the ideal solution, one duvet that offer that offers 3 different tog ratings to cover, well, whatever the weather. A duvet for all seasons – the All Seasons Duvet.

The All Seasons Duvet is a 3-in-1 lightweight combi duvet with a hollowfibre filling and soft-touch cover. It is comprised of a 4.5 tog duvet, a 10.5 tog duvet which can combine together to create a 15 tog duvet. It pieces together or pulls apart to get your perfect tog rating of duvet when the weather changes. An easy way to make a choice (and reduces space needed in the cupboard for storage lots of different duvets). The All Seasons Duvet is available in single, double and king size and is perfect for keeping you nice and toasty on the coldest of nights, nice and cosy on warm nights and nice and cool on hotter nights.

So how does it work? The Slumberdown All Seasons Duvet is comprised of two duvets: a 4.5 tog rated duvet and a 10.5 tog rated duvet. They can be used individually as separate duvets or combined together using the poppers on each duvet to create a 15 tog rated winter duvet.

Overall, we really like this duvet. Having one duvet that does three jobs is excellent and means that we do not need extra big bulky duvets in the cupboard taking up space.

The duvets go together easily and securely with the popper system (like the poppers that you find on duvet covers), although we did feel that the duvets could probably benefit from more poppers – especially on the corners as sometimes the two duvets did pop apart. They go together well and fit our duvet covers the same as standard duvets.

The duvet, in any combination, is lightweight but very comfortable and keeps us at the right temperature for a more comfortable night’s sleep (depending on what combination we are using). The fluffy hollowfibre filling and soft-touch are perfect for people with allergies and the duvet(s) are machine washable (at 40°) and are dryer friendly.

We have been impressed with the All Seasons Duvet and the comfort and tog ratings, it really has been useful with the constantly changing weather and temperatures at the moment. It has given us the flexibility to get our sleeping temperature just right with the minimum of fuss.

A good duvet that really is perfect for All Seasons. Soft and comfy with good temperature control, easy to fasten together or split apart and reduces storage space as well.