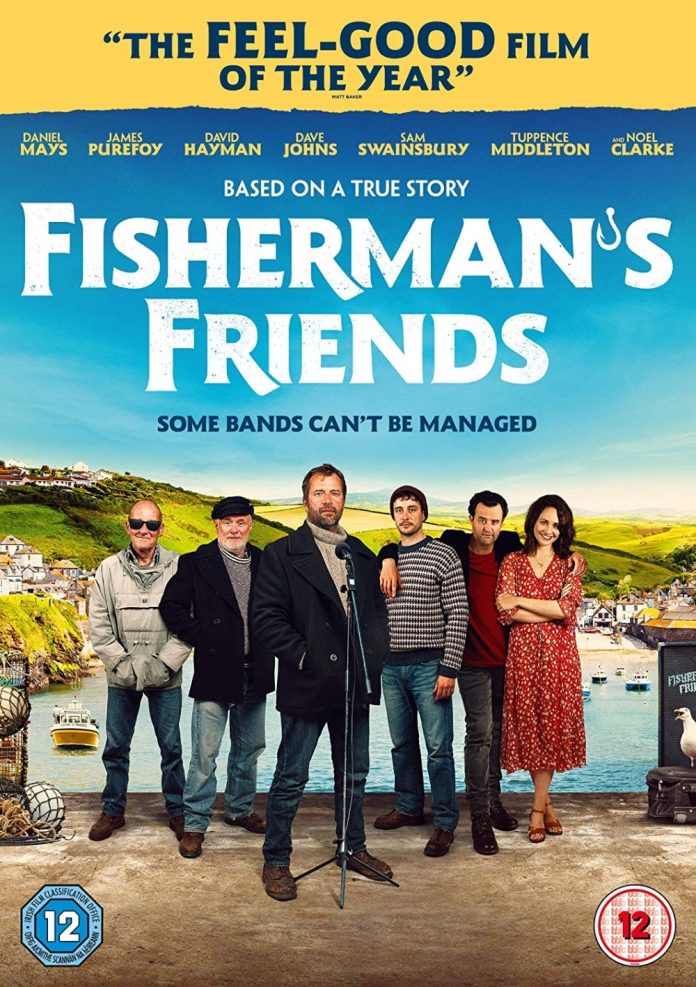 We watch lots of different types of films in our house, although we never thought that we would be watching one based around sea shanties, but we did with Fisherman’s Friends!

For those that don’t know, sea shanties are centuries old traditional communal folk/work songs that used to be sung by working fishermen when out labouring on their boats, usually accompanying repetitive labour-intensive tasks such as scrubbing the deck or hoisting the sails (you will all have heard of (What Shall We Do with the) Drunken Sailor). You may have seen in the news recently that the internet has gone overboard for them due to a TikTok video called The Wellerman, sung by a Scottish postman Nathan Evans (it has become so popular he has quit his job). In our house we are fully aware how it has taken hold as the eleven-year-old won’t stop asking Alexa to play it!

As sea shanties are having (another) resurgence, it reminded us of a film that we went to the cinema to see in 2019, Fisherman’s Friends – a film based on true events about a group of sea shanty singing fishermen from Port Talbot in Cornwall, and it was absolutely brilliant! We enjoyed it so much that with the kids seeming to like sea shanties we purchased it on DVD and watched it again.

What is Fisherman’s Friends? First and foremost, we are not talking about the famous eucalyptus and menthol flavoured lozenges Fisherman’s Friend. We are talking about a biographical comedy-drama, based on events around a group of 10 real fishermen from Port Issac in Cornwall and how they were discovered by a music manager, going on to land a record deal and a Top Ten hit.

Fisherman’s Friends stars Daniel Mays as Danny, Tuppence Middleton as Alwyn, James Purefoy as Jim, David Hayman as Jago, Dave Johns as Leadville, Sam Swainsbury as Rowan and Noel Clarke as Troy. The screenplay is by Nick Moorcroft, Meg Leonard and Piers Ashworth and it is directed by Chris Foggin.

The premise of the story is that whilst on a stag weekend in Cornwall (if you watch Doc Martin who might recognise where this film is set), music executive Danny (Daniel Mays) is ordered by his boss Troy (Noel Clarke) to do whatever it takes to sign a group of fishermen and coastguards/lifeboatmen singing sea shanties on the harbour. What Danny didn’t know was that his boss wasn’t serious and was just playing a prank on him. Whilst the rest of the stag party return back to London, Danny is left behind and told not to return until he has signed the fisherman to their label.

The story that follows is the tale of how Danny tries to win over the trust of the band, integrate himself into the local community, gain friendship and trust of the locals, and get a record deal in the process. His experience forces him to re-evaluate what is important in life.

Overall, Fisherman’s Friends is an excellent and really enjoyable and uplifting, light-hearted comedy-drama. Daniel Mays is perfect as the sceptical cockney music executive, an outsider, who believes in the band, the town and the way of life.

The fishermen are brilliant with James Purefoy leading the group and David Hayman providing the comedy.

Whilst the film is ultimately about the band (a boy band like no other) and Danny’s attempt to get them a record deal, it is also a love story, a story of friendship, community and trust.

We really enjoyed it and it is a good film to sit down and relax to whilst watching it (and maybe even join in and sing the odd shanty yourself). It is a film that will leave you with a smile on your face. There is some infrequent strong language and some jokes about sex but on the whole, it suitable for family viewing with children aged 12 plus.

Available to buy on Blu-ray and DVD from Amazon here.