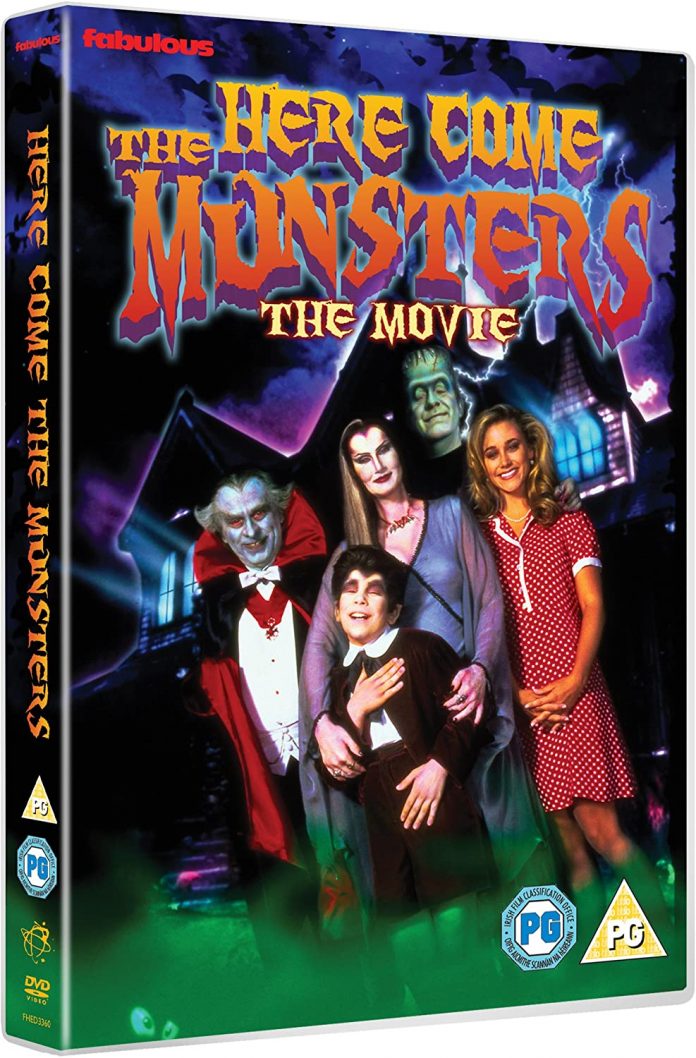 Growing up I used to love watching The Addams Family, but more so I loved watching The Munsters. Despite them both being television shows from the 1960s, they were still great when I was watching them in the 70s and 80s. They are very similar to each other, but I just found The Munsters to be slightly funnier and more enjoyable. In our house now, the kids love to watch The Addams Family, especially as it was released as an animated comedy a couple of years ago. But nostalgia is a very powerful thing, so I delved into my old DVDs to dig out my copy of Here Come The Munsters (from Fabulous Films), the movie based on the 1960s show. This film version was released in 1995 and in full colour (not black and white as the television show was).

In Transylvania, in a very peaceful village, the villagers are upset with their very strange neighbours. These neighbours are The Munsters, an oddball family of vampires, a werewolf, a Frankenstein-type monster and the ‘monster’ of the family, an ugly human! Tired of being persecuted by the pitchfork wielding, bigoted locals they decide to leave Europe and cross the ocean to the USA!

Herman Munster, played by Edward Hermann, is patriarch of the Munster household and is a Frankenstein-type monster, Lily Munster (née Dracula), played by Veronica Hamel, is, you’ve guessed it, a vampire, Grandpa (father of Lily Munster), played by Robert Morse, is also a vampire, Eddie Munster (Herman and Lily’s son), played by Matthew Botuchis, is a werewolf, the true ‘monster’ of the family, Marilyn Munster (daughter of Lily’s sister), played by Christine Taylor, who is a ‘very ugly’ human and finally their pet fire-breathing dragon, Spot.

On arrival in the Land of the Free, all is not well. One relative has gone missing, one is in a catatonic state, one really isn’t coping very well, and Brent Jekyll is running for Congress. The Munsters have to try and get to the bottom of it all, but the nosy neighbours have taken offence with the latest additions to their neighbour and have called in the police.

Overall, we all loved watching The Munsters and had lots of laughs along the way. Whilst it isn’t a good as the original television series (are things ever as good as the originals?), it is a charming, funny and inoffensive comedy that is suitable for all the family. The humour is still as silly and slapstick as the original show and if you remember the original cast pay close attention to the coffee house scene where they make cameo appearances.

If you like The Addams Family you will love The Munsters, who doesn’t like domesticated vampires, werewolves and monsters? It is a fun film about being different, being who you are and trying to fit in with a bit creepiness and mystery. The kids still prefer the animated version of The Addams Family but really enjoyed this (and in my opinion it is a lot better). A fun comedy that you can just sit down and enjoy, having a laugh with your family.