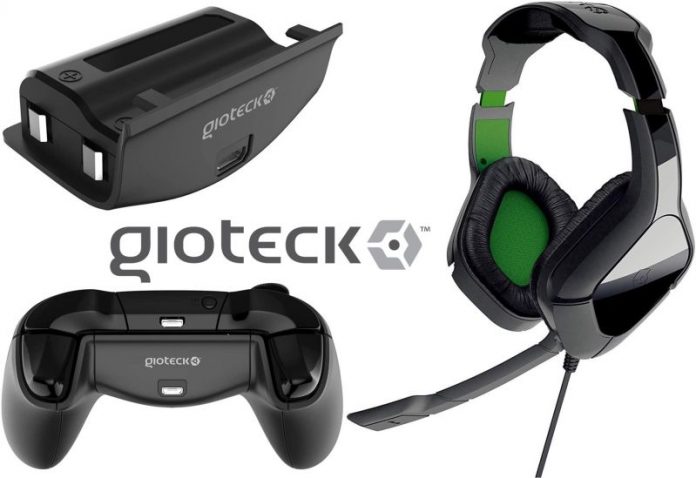 Gaming has come a very long way since I was a child playing on a BBC Micro and Amstrad 64, followed by a Sega Master System. In fact, gaming is now unrecognisable from the games we thought were absolutely cutting edge in the 1980’s. Gaming is now actually a HUGE business, and some people even make a living playing games!

With gaming now more of a social habit with online gaming and being able to talk to as well as play with your friends online. That means games consoles also have more equipment than the joypad I had when growing up. Now controllers are wireless they need power, and they eat batteries! So rechargeable powerpacks are a must! And then you need to be able to talk to and hear your friends so headsets are a must have requirement for any serious gamer.

Thankfully, battery packs and headsets are readily available and start from really budget friendly prices so that they are accessible to all. Gioteck have a large range of accessories for games consoles including Xbox, Playstation, Nintendo Switch and even for PC and kindly sent us one of their gaming headsets and a rechargeable battery pack for our Xbox One to try out.

Anybody that owns an Xbox or any other games console will know that the wireless controllers eat batteries quicker than a child let loose in a sweet shop powering through the sweets so a rechargeable battery for your controller is a MUST! Gioteck kindly sent us their BP32 32-hour battery pack, which is suitable for the Xbox One®, Xbox One S® and Xbox One X®.

Replacing batteries constantly on wireless controllers for your games console can get quite expensive, and what happens when you run out of batteries and there are none left in the drawer? The Gioteck BP32 32-hour battery pack has an RRP of £12.99 (but can generally be purchased for £9.99) and solves those problems and saves you lots of money quite quickly. When installed in any official Xbox One® wireless controller and fully charged, it will give up to 32 hours of play before needing to be recharged. In the event that you forget to charge it and it does run out during play, you can use the supplied 2 metre plug and play cable that allows to carry on playing whilst at the same time charging the battery. What more could you want? No interruption to your gameplay.

The battery pack fits snuggly into the battery compartment of the controller and plugs in to the Xbox USB port to charge. There is a LED charging indicator to let you know when it is fully charged. There is no weight difference to the controller over using standard batteries.

This has to be the first accessory that you buy for your Xbox One®. Plug it in, charge it, and you are ready for wireless play in no time, and can even play whilst it is charging! There is no doubt that this is a 5* product.

The other item we received was the Gioteck Stereo Gaming Headset. Anybody that plays, or wants to play, online games with their friends or other people will need a gaming headset, after all you need to hear the people at the other end and they need to hear you.

The HCX1 Stereo Gaming Headset has an RRP of £19.99, so is at the budget end of the gaming headset market, but the quality of the build doesn’t feel cheap and the sound quality is very very good.

The HCX1 are wired headphones with a detachable microphone, they use a 3.5mm stereo jack to connect to your games console and can be used on an Xbox One®, PS4™/PS5™, Switch™, PC and Mobile.

The headset we received is in green and black but blue is also available. The headset comes with a detachable microphone (the microphone isn’t the most aesthetically pleasing) for when you are playing games where you just want to listen to game and its effects. It has approximately 2 metres on the cable length (I personally would have like to see at least 3, possibly 4 but that is just my personal preference). The headset itself is really comfortable with the adjustable headband, deeply cushioned padded earpieces and the headset itself is quite light and sturdy.

Now the sound. For a budget set of gaming headphones you probably wouldn’t expect much but the Gioteck HCX1 are very good. With 40mm speaker drivers they have excellent depth and crystal-clear immersive sound. They headset doesn’t block out surrounding sound entirely but for a budget set of gaming headphones they do an excellent job. The microphone is also very good, it picks up the sound very well and is clear at the other end.

The HCX1 is a very good budget gaming headset, definitely value for money and feel and sound much better than their price would suggest. Definitely another must have for gamers that already own a games console or who might be lucky enough to receive one this coming Christmas.

Gioteck gaming headsets and battery packs are available to buy from Amazon and Argos.

DISCLOSURE: We received these products for free for the purpose of writing an honest and impartial review. All thoughts and opinions are our own. This review uses an affiliate link which we may receive a small commission from if you purchase through the link.