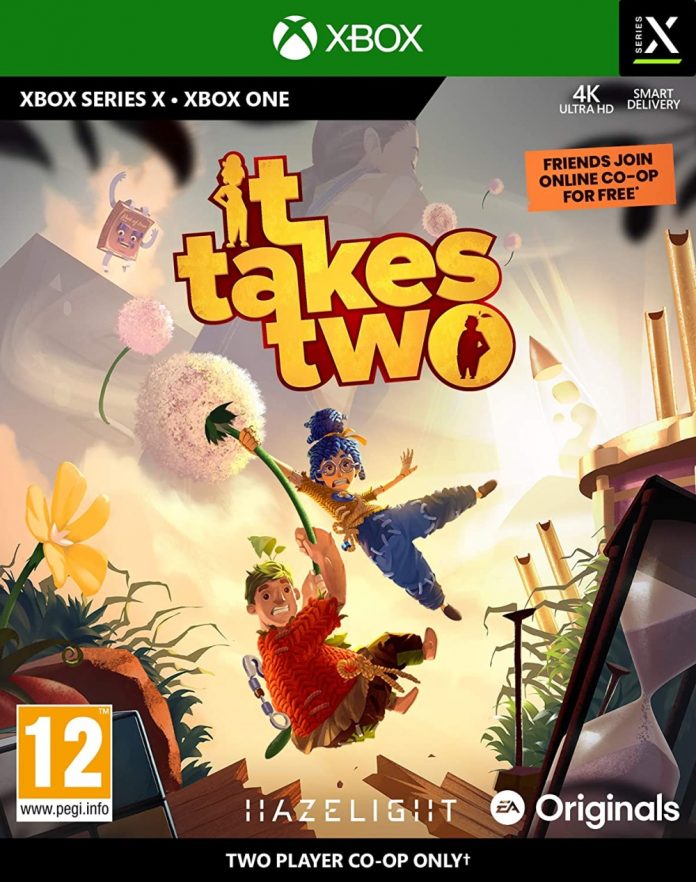 In our house we do try to limit screen time as much as we can and the kids have limited time on the Xbox every week, but it can be great fun when we all play a co-op game together as a family. As adults, we also like to relax and play a game or two on the Xbox, although our choice of games is different from the kids and prefer puzzle and logic games – something where you have to use a bit of brain power and deduction. Recently we have really enjoyed playing Overcooked 2, Unravel Two and Keep Talking and Nobody Explodes, but we have found another game that we are really enjoying called It Takes Two, and we are losing several hours in the evening trying to solve the game.

It Takes Two is a 3D action adventure, puzzle solving platform game from Hazelight and Electronic Arts (EA). It is purely a co-op game for two players where you have to work together to complete it (you cannot play it as a single player).

It Takes Two stars parents Cody (Dad) and May (Mum). Their lives are busy, and they just aren’t getting along so after years of marriage want a divorce – Cody never finishes anything, and May spends far too much time at work. When their young daughter Rose hears about their proposed split, she isn’t very happy. She makes some dolls that represent her parents and with the aid of a Book of Love that she found at school she makes a wish (or spell) that her parents do not split up and when her shed tears hit the dolls her parents are magically inserted into their bodies. Now the dolls must get along and work together to find their way back to their own bodies and their daughter (and maybe repair their broken relationship in the process). They are now on a quest that takes them on a wild journey through their home and garden in ways that they have never seen them before, featuring a talking vacuum cleaner, a nasty toolbox, a band of militant squirrels and lots more.

With the help, and some couples therapy, from their guide, a talking book (the Book of Love) in the form of a suave Latin love guru Dr. Hakim and his gyrating hips (I love him, although for some reason he just reminds me of a ‘one sheet’ kitchen roll advert with his dodgy accent) they have to complete a series of challenges to find their way back, hopefully saving their marriage in the process.

Overall, we absolutely love this game. Completed over 7 levels with plenty of mini games to be found within the gameplay, it is lots of fun and co-operation, teamwork and speaking with each other to solve the puzzles is key – an escape room type game on the screen!

The world you play the game in is an exaggerated world that is seen through the eyes of a child with everyday household objects becoming monsters, tree houses that are filled with armed squirrels, clocks that change and bend time, snow globes and magic castles that are filled with wonder (and lots of danger), etc.

Played mostly on a split screen, this is a game that constantly challenges you, finding new ways to keep you entertained using lots of different abilities and puzzles. The creativity of the puzzles and games is excellent – and they are all different but require working together to complete them!

As you work your way through very visually pleasing levels with themes such as DIY and a toolbox (using the head of a claw hammer and nails as weapons and tools), a tree house with an army of mercenary squirrels and a deadly wasps nest (where a sap gun and rocket launcher rule), a space theme, cuckoo clock and magic castle, even the inside of a piano and fighting diseased plants in the garden and greenhouse, mini games are unlocked during the game. These mini games can see you electrocuting your partner, playing whack-a-mole with your partner as the ‘mole’, playing tug of war over a hole in the ground, snowball fights and lots more – all designed to take out Cody and May’s frustrations out on each other.

The game features an excellent array of very diverse and some very strange characters, to help and hinder, making the game very interesting, fun and extremely playable.

It Take Two has a PEGI rating of 12 (for 12 years plus) but I would probably say it should be PEGI 16 (for 16 years plus). This reason for this is not due to the gameplay itself or the infrequent mild bad language, I think PEGI 12 is about right – although some of the challenges can be quite difficult to work out, but due to the theme that is based on with the parents divorcing, the upset child crying for them to fix their relationship, and to break the spell the parents are under they have to try and make their daughter cry and destroy one of her toys to do so. It might just be upsetting for some younger emotionally immature players. The story used could have been slightly different.

Other than the backstory of Cody, May and Rose that may work for some and not others, It Takes Two is a delightful, charming and visually brilliant game with excellent gameplay. The characters are two completely different personalities with different skill sets and rather than racing each other to the end they have to work together in harmony, complementing each other’s skills sets to achieve their goals.

It Takes Two is a fun and entertaining game that we have lost several evenings to. It is definitely one of the best co-op games we have played. Probably better suited for older teens and adults than the kids, but if you love co-op puzzle-solving games with lots of action and adventure then this is it!

Available to buy through the Microsoft Store or Amazon.

Keep Talking and Nobody Explodes Review

Keep Talking and Nobody Explodes Review