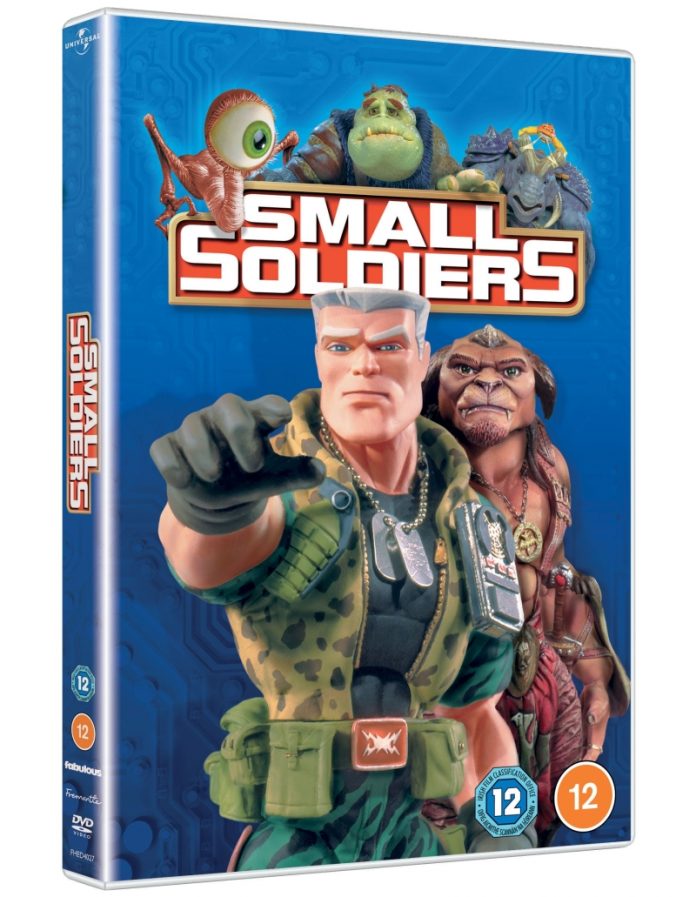 “Everything else is just a toy”

Movie night is something that we love in our house – sitting down together with some popcorn or even a pizza and a good film. Fabulous Films are a great source for classic films and recently sent us Small Soldiers on DVD to watch – I remember watching it years ago (the original release was 1998) and I really enjoyed it then, and now the kids get to enjoy it too.

Heartland Toys have created a range of action figures that were designed to be in harmony with each other and non-violent. GloboTech, the owner of Heartland Play Systems, has other ideas and want smart action toys that are voice activated, interact with each other, hunt and destroy. When the dolls are accidently equipped with the X1000 military munitions microchips, fitting advanced battlefield technology into consumer products, they take on a life of their own and war breaks out.

Troubled teenager Alan Abernathy (Gregory Smith) manages to get hold of a full set of the Commando Elite and Gorgonite dolls before they go on general sale to sell in his family toy shop. But when the commandos go on the attack he is enlisted by the friendly, non-violent and kind-hearted Archer, leader of the Gorgonites, to help them. Leading to a battle to save the Gorgonites, defeat the Commando Elite and rescue Christy (Kirsten Dunst), the girl of his dreams who he has a crush on, before the whole town is turned upside down.

Overall, Small Soldiers is a very enjoyable family action film with some dark comedy, but be warned, there is a lot of comic-book violence between the dolls, so may be too frightening for younger viewers (there is no blood and gore but dolls are dismembered).

The action-packed film has lots of CGI effects and voice-overs (Chip Hazard, leader of the Commando Elite is voice by Tommy Lee Jones whilst Archer, leader of the Gorgonites is voiced by Frank Langella) and is somewhere between a children’s film and an action movie. It has a lot of dark humour (like using the music of the Spice Girls in psychological warfare) and war violence. For us adults, it was very enjoyable and entertaining (not as good as Gremlins). The kids also enjoyed it, just not as much as the adults (I guess that is nostalgia at work or a better appreciation for some of the humour).

Denis Leary brings his unmistakeable persona to the role of the CEO of GloboTech and whilst he doesn’t have a big part to play, he executes it very well. Tommy Lee Jones is perfect for the voice of Chip Hazard, bringing the toy soldier to life.

The storyline of munitions chips being added to toys and turning them into miniature plastic soldiers that are alive, thinking for themselves and carrying out their primary programming of vaporising the enemy is a little absurd but the effects are good and it is very entertaining. We think that the age rating of 12 years + is probably about right.

A fun film that for me was as good as I remember it. A film that is still very relatable today as it was in 1998 as kids are now more used to having smart tech, although hopefully nothing that will jump out of the cupboards and attack.