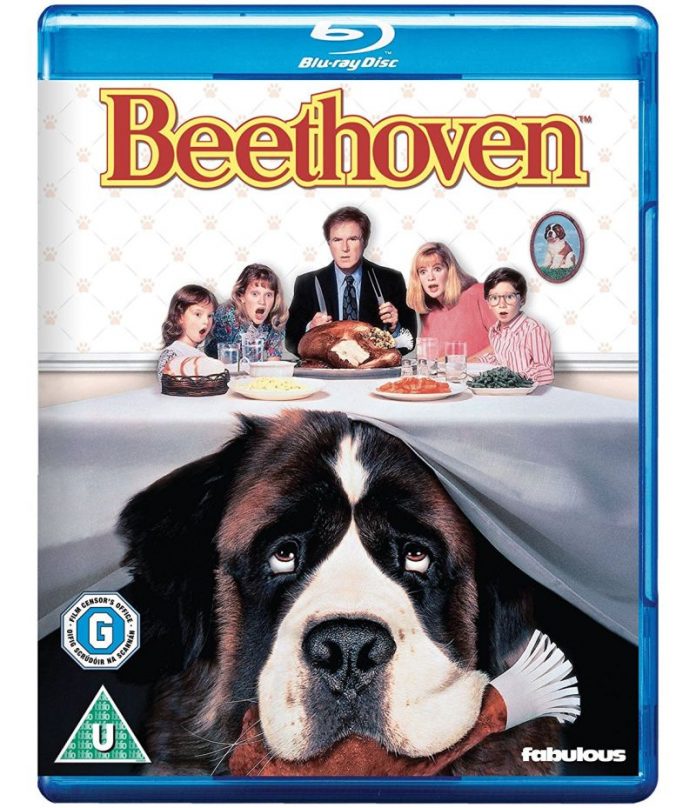 Beethoven is known the world over; everybody has heard his music. When Beethoven is mentioned, we think of the German composer and pianist, famous for his music, which is still being played and recognised hundreds of years later. But there is a second, and in our opinion, much more lovable Beethoven – the 185lb St Bernard dog!

With a second national lockdown about to start in England where we will only be allowed to leave home for essential purposes (shopping, work, school and medical appointments) we have been going through our film collection for family films to watch with the kids. We came across a big favourite that us adults in the house remember watching and enjoying and thought that the kids would enjoy it too, and they loved it!

Beethoven is a 1992 family film about the most lovable, adorable and loyal dog that has to be the clumsiest and disaster-prone dog to have even lived. And he is a monster, weighing in at massive 185lb (13 stone / 84kg).

For those that have never seen it or need your memory refreshing, as a puppy Beethoven is stolen from a pet shop by unscrupulous dognappers in the dead of night, but he manages to escape. He eventually finds his way into the home of the Newtons and decides to adopt the family, against the wishes of George Newton (Charles Grodin). His wife (Bonnie Hunt) and their 3 children fall in love with the small puppy and persuade him to keep the dog.

Beethoven is loved by all the family, except the uptight George, and Beethoven loves and protects them all. But as all puppies do, he continues to grow, getting bigger and bigger, until he becomes an enormous 185lb monster of a dog.

When a vet (Dean Jones) is approached to run an experiment that requires a large dog as a test subject, he sets his eyes on Beethoven and wants to get his hands on him anyway that he can. The only person who can possibly save him is George.

Overall, Beethoven is a fun, family film. Charles Grodin is perfect as the uptight dad. Bonnie Hunt and David Duchovny are excellent, as are the children, especially the youngest Sarah Rose Karr. Dean Jones is also great as the villain of the piece. But the star of the movie is definitely Beethoven, the dog is just fantastic.

We have loved sitting down as a family watching it, especially as the kids had never watched it before and they really enjoyed it.

Beethoven is a classic family film that has been enjoyed by families for nearly 30 years and it is still great family fun. Despite being from the early 90s it is still as funny and entertaining as it was back then. A fun and heart-warming that children, adults and families can enjoy it all over again on Blu-ray. If you remember the film from the first time around, you will love it again. If you have never seen it before, you will enjoy this family favourite again and again.

DISCLOSURE: This review uses an affiliate link which we may receive a small commission from if you purchase through the link.