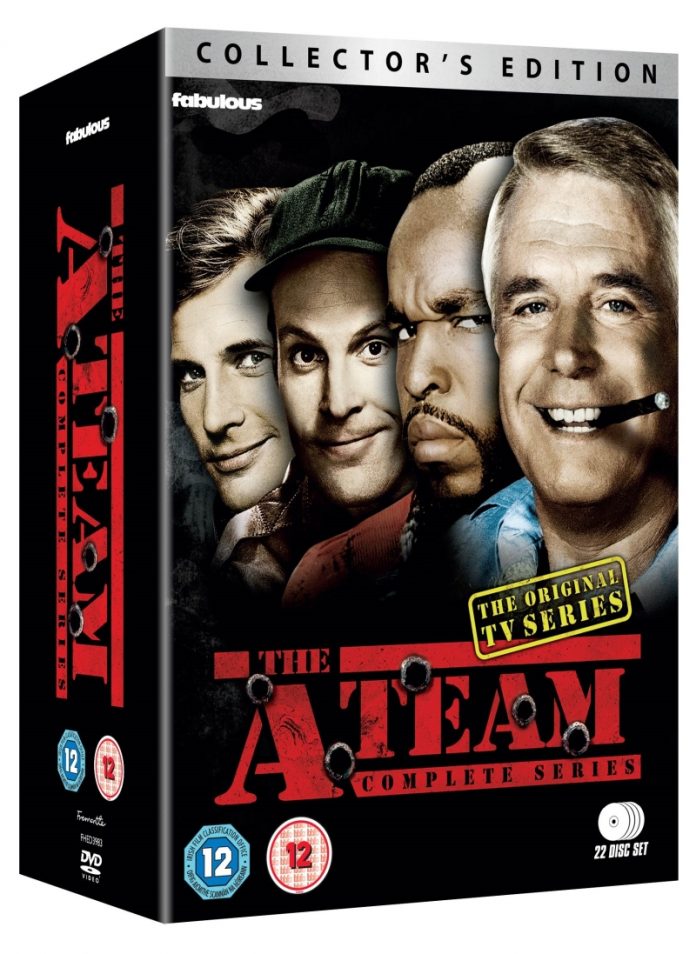 “I love it when a plan comes together” – John “Hannibal” Smith

Now that we are all confined to home because of the Coronavirus (COVID-19) worldwide pandemic, the novelty has probably worn off. With restrictions in place so that we are limited in how and when we can go out of the house, we have to find other things to do, and there is only so much cleaning and DIY we can do. So that leaves television and some serious binge-watching. Thanks to Fabulous Film I have been sitting down and watching some shows that I loved from my childhood, with the latest being The A-Team!

When I was growing up, 80s Saturday afternoon television consisted of some action-packed shows that, as children we loved. There was nothing better than settling down in front of the television watching The A-Team with Hannibal, Face, Murdock and B.A. Baracus. The A-Team ran for five seasons over 3 years (1983-1986) but has now been re-released as a complete 22-disc DVD box set Collector’s Edition with all 97 episodes from Fabulous Films.

“In 1972 (originally said 10 years ago), a crack commando unit was sent to prison by a military court for a crime they didn’t commit. These men promptly escaped from a maximum security stockade to the Los Angeles underground. Today, still wanted by the government, they survive as soldiers of fortune. If you have a problem, if no one else can help, and if you can find them, maybe you can hire… the A-Team.” – John Ashley’s opening narration.

For those that don’t know, or have never watched the show, the show follows the lives of four Vietnam soldiers were convicted of a crime they didn’t commit – robbing the Bank of Hanoi. Acting under orders on a secret mission, ordered to do so by their Commanding Officer, they were tasked with robbing the bank to help bring the Vietnam war to an end. After successfully robbing the bank, they return to base to find their commander dead and the base destroyed with no proof they were acting under orders. Subsequently arrested for the crime they were locked up in Fort Bragg, a maximum security stockade, from which they promptly escaped and disappeared into the LA underground, becoming soldiers of fortune to earn a living and stay out of prison. If you could find them and had a case of social injustice, you could hire them to put things right.

Colonel John “Hannibal” Smith played by George Peppard. Hannibal is the cigar smoking leader, a master of disguise and who has a penchant for acting in the movies. His plans are always unorthodox but generally work and he “loves it when a plan comes together”.

Lieutenant Templeton Peck, aka Face or Faceman played by Dirk Benedict. Face is the handsome smooth-talking con man (master of the persuasive arts), ladies’ man and second in command. His job is to appropriate any items the team may need and handle the money from any jobs.

Captain H. M. “Howling Mad” Murdock played by Dwight Schultz. Murdock is the team’s pilot who can fly any kind of aircraft. He has been declared insane and resides in a Veterans’ Administration mental institution, except when the team break him out or he escapes when needed for jobs.

Sergeant First Class Bosco “B.A.”, or “Bad Attitude”, Baracus played by Mr. T. B.A. is the team’s muscle and mechanic. He dislikes Murdock with a passion as he is a “crazy fool”. With his mohawk haircut, excessive amount of gold chains around his neck and rings on every finger and weightlifting belt he is a very imposing figure (and my favourite character).

Each episode sees the team hired, after a careful vetting process where prospective clients must meet the mysterious Mr Lee, to take on a dangerous mission. These missions see the team travel the world to places like Borneo, Mexico, Zimbabwe, but mostly around the United States.

Each episode guarantees car chases resulting in lots of car crashes and cars flying through the air (which everybody generally walks away from unharmed), fist fights, gun fights and constantly being chased by the MPs (Military Police).

Overall, I loved the show growing up and still enjoyed it today. A good way to whittle away the hours of self-isolation without having to think too much. I loved it growing up and now, whilst I now see a lot of the flaws in the show, it is nostalgic fun, even with its cartoon violence, unbelievable plots and mannequins used at stunt people! It is pure escapism, and no swearing!

The A-Team features lots of sanitised violence – for the most part, no one dies (5 people died throughout the whole five seasons), people rarely bleed although sometimes a sling or cast is needed for minor injuries – as a child I didn’t think of the implications of this, showing that bullets don’t kill, and everyone survives car, helicopter and plane crashes.

Growing up, I never noticed the blatant sexism throughout the show (although I think you could go through lots of 80s TV shows and find something to offend), but watching it back now the female characters really do seem to be irrelevant with very little parts to play and are mostly there for the object of Face’s attention (although Amy Allen (Melinda Culea) went from newspaper reporter to gun-toting member of the team to apparently appease the critics). It was apparently deemed as a show for men – written and directed by men, acted by men and watched by men.

Whilst it now may deemed as a politically incorrect show, it is easy watching and fun.

Taking it for what it is, an 80s TV action show, and the enjoyment I remember from growing up I would still have to rate it 5 stars – maybe that’s just nostalgia, but I love it. If you watched the show in the 80s and enjoyed it, then this Collector’s Edition DVD box with commentary, interviews and behind the scenes featurettes is one to own.